Creflo Dollar: The Devil is Trying to Discredit Me Over Jet Campaign

(CNN) Prosperity gospel pastor Creflo Dollar responded recently to critics of his campaign to buy a very pricey Gulfstream G650. Dollar noted in a recent address to his congregants that the devil was attempting to discredit him in regards to his campaign seeking $300 from 200,000 people globally to help buy the luxury jet.

In a newly posted five-minute clip on YouTube, the Atlanta-area pastor speaks to his followers at World Changers Church International, tackling his critics and allegations about tithes, his real name and reports alleging members of having to reveal their W2 statuses to come into the church’s sanctuary. 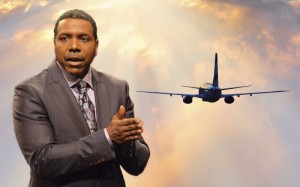 “(The devil thinks) I got to discredit that man before he starts showing people Jesus!” Dollar preaches to loud applause. “I’m on my sabbatical, and the enemy’s trying to discredit me,” Dollar stated.

Dollar is focused in the video on getting his point across and slams critics of his original request by stating to the people gathered, “I never one time came to you and asked you for a dime for this airplane, did I?”

But in March, Dollar did appeal in a video to “friends from around the world,” soliciting donations to replace his current 1984 Gulfstream G-1159A. Because of two accidents that occurred in the 31-year-old plane, Dollar and his staff have been flying commercial.

“The (critics) don’t know what we do. That’s why they asked the question, what does a preacher need with an airplane? If you knew what we did, then you wouldn’t ask that question,” Dollar said. “Just because the world doesn’t have it, doesn’t mean that you can’t.”

In March, the ministry’s desire to purchase a Gulfstream G650 airplane was met with criticism on social media and was the subject of nationwide media reports.

The furor came after a nearly six-minute video was uploaded on the Creflo Dollar Ministries website soliciting money for a Gulfstream G650, which sells for a reported $65 million.

The page featuring the video and information on the fundraiser has been taken down, but those wishing to donate are still able to do so on the church’s gift page.

A Gulfstream G650 can fly 18 passengers and four crew members, according to gulfstream.com.

The jet comes with two Rolls-Royce engines, high-speed Internet and two multichannel satellites and allows for a four-and-a-half-hour commute from New York to Los Angeles.

“The G650 is the biggest, fastest, most luxurious, longest range and most technologically advanced jet — by far,” according to the site.

The project wasn’t limited to member donations, as the site stated that “we are asking members, partners and supporters of this ministry to assist us in acquiring a Gulfstream G650.”

In the new video, Dollar claims the church has more than 3 million supporters worldwide who want him to come to where they are.

The pastor has said the two incidents involving his old plane — including one in which a mechanical failure caused the jet to skid off a runway in London while his wife and their three daughters were aboard — have shown him it was time to turn to God for a new airplane.

Prosperity gospel is a theology that promises wealth and health to those who tithe 10% of their income to the church. Attempts to contact Dollar’s ministry for comment were unsuccessful.