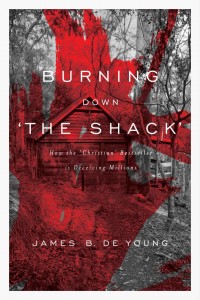 It’s no longer up for debate. “The Shack” promotes “universal reconciliation,” a heretical doctrine that claims everyone in the world will eventually be saved by God and therefore there is no need to be concerned about hell.

William Paul Young, author of the “Christian” bestselling book that is the source of the eponymous film, is out with another book, “Lies We Believe About God.”

His new book contains claims that many Christians would find not just shocking, but blasphemous.

James De Young, a New Testament language and literature professor at Western Seminary in Portland, Oregon, wrote “Burning Down The Shack” to rebut what he claims are the heretical teachings in “The Shack.” He believes his former friend William Paul Young has now shown his hand with his latest work.

“The new book clarifies once and for all that Paul Young believes all kinds of heretical things,” said De Young. “Why would he admit this? In a recent interview with Religious News Service Paul commented that he believes that the evangelical church is crumbling and he is on the cusp of a new reformation with new doctrine.”

According to a March 3 article at RNS, Young refers to a major change within evangelicalism, “returning to an understanding of God in line with the early church fathers and mothers.”

He is quoted as saying: “As the structures start to crumble, which they are, all of a sudden permission to ask the questions is emerging. I think that’s a movement of the Holy Spirit. … I think we’re on the cusp or inside the beginnings of a reformation.”

Indeed, Young calls for a “reformation” rather than “revival” on his website.

De Young, who knew Young well before “The Shack” was written, says Young is now being open about views he has long held.

“In 2004, Paul confessed in a 103-page paper presented to a Christian forum that he was rejecting his evangelical paradigm, as he called it, and embracing universal or Christian reconciliation,” De Young said.

“This, he said, changed his life. This heresy proclaims that God’s love limits his other attributes, such as holiness and justice. Thus, everyone is going to confess Christ, either before one dies or afterward, so that hell ceases to exist and even the Devil and his angels go to heaven. What sort of heaven will this be?

“When Paul first wrote his novel, it was full of universal reconciliation and his two pastor friends objected to it. So the three of them spent a year trying to remove the universal reconciliation before publishing it in 2007. But it is still subtly there. I’ve written ‘Burning Down the Shack’ to expose it. For 10 years most people have been reluctant to believe what I’ve been saying; and Paul has denied it.

“Now, in his latest book, ‘Lies We Believe about God,’ Young has brazenly declared that Christian theology is wrong. Each chapter deals with one of 28 ‘lies’ that we believe. And on page 118, he confesses that he has been a follower of universal reconciliation, that everyone is saved already – no one needs to get saved. Also, he declares that sin does not separate anyone from God, that hell is not separation from God, that God is not in control of everything, that God does submit to human plans, that the Cross of Christ was man’s idea not Gods; that the sacrifice of Christ was not God’s requirement, etc.”

Young’s background has received new attention recently as the author told the London Daily Mail he wrote “The Shack” as a way to deal with his pain from systematic sexual abuse as a child.

Young told the British paper, “My dad didn’t have the capacity to be a good father,” noting there was “brokenness in my family history.”

He claims as a child he was systematically abused by the Dani Tribe in New Guinea, where his parents were missionaries. He was then molested by older boys when he went to boarding school, he said.

De Young said this background certainly impacts the teachings in “The Shack.”

“The revelation about Paul’s background is nothing new, he’s been telling this story for 10 years or more – coextensive with the publishing of ‘The Shack,’” said De Young. “I did not know this story during the decade or more before 2007. It gains for him a tremendous sympathetic hearing and impels people to want to buy the book. I think that there is a great element of emotional manipulation going on in Young’s public speeches, especially in churches.”