“Information Clearing House” – Crooked Hillary Clinton trolled the President prior to the Trump-Putin summit. On Sunday evening, Hillary asked Trump, “Do you know which team you play for?”

She had the nerve to tweet this after she paid millions of dollars for a fake Russia dossier and sold 20% of our Uranium to Russia in exchange for $150 million to the Clinton Foundation.

Vladimir Putin: “Last year there was one extradition case by the United States… Mueller can use this treaty as an official request to us… in this case this kind of effort should be a reciprocal one… For instance we can bring up Mr. Browder… They sent a huge amount of money $400,000 to Hillary Clinton! …So we have solid reason to believe that some [US] intelligence officers accompanied and guided these transactions. So we have an interest in questioning them.”

Social media was set ablaze after Putin dropped this bombshell and called Mueller’s bluff over his indictment of 12 Russian military officers. 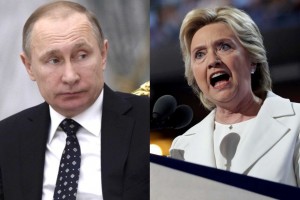 Crooked Hillary desperately tried to deflect from the nuke Putin dropped on her. In a grotesque display of unabated hubris, Hillary Clinton attacked President Trump to deflect from her own corruption. Hillary tweeted in response to her previous troll, “Well, now we know.” [which team you play for]

Obama’s corrupt intel officials also lashed out over this Putin bombshell. Ex-CIA Chief John Brennan lost it after this revelation that US intel helped move $400,000 to Hillary’s campaign, accusing Trump’s presser of being “nothing short of treasonous.”