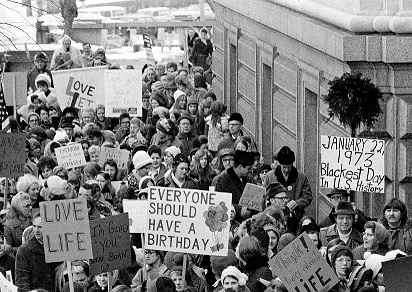 Someone has said that on D-Day (June 6, 1944) human destiny was changed forever. D-Day is the day Allied Forces took their enemies by surprise and staged the largest invasion from the sea in human history. An armada of 5,000 ships and 13,000 aircraft put 156,000 soldiers on the ground. They established a beachhead and opened the way for a million troops by July 1. One year later, on May 8, 1945, WWII ended. But it had cost the lives of millions; destroyed homes, families, and cities; and brought huge suffering to entire countries. D-Day meant an end to war, but it also began a time of rebuilding.

In a similar way, D-Day is fast approaching for the infamous Roe v. Wade SCOTUS decision. On January 22nd, 1973, war was declared on helpless preborn infants, and since then, the lives of over 63 million preborn babies have been lost. Roe wreaked havoc on individuals, families and upon our whole nation. Surveys have repeatedly shown that most Americans believe that there should be restrictions on abortion, especially after the first trimester. The “leak” about Roe being overturned indicates that most of the sitting justices believe the original Roe decision was flawed and there is no constitutional right to an abortion.

What many people don’t realize is that if Roe is reversed, it would not automatically outlaw abortion across America. Instead, it would go back to the states, and each state would decide the destiny of their unborn children. Each state will face vastly different scenarios after Roe, ranging from very pro-life to strongly pro-abortion, with the majority having some restrictions. See AfterRoe.com for more info and to learn how you can be involved in preventing abortions and pursuing a community where life is cherished.

In Rhode Island, there are literally no restrictions on the abortion industry. After Roe, our state is set to remain one of the most radical pro-abortion states in the nation and possibly a haven for abortionists. We can’t allow that to happen. Recently, our legislature considered a bill that would have legalized taxpayer-funded abortion. At this point, it has been tabled, probably because it is an election year, and it was too risky for most politicians. However, you can be sure the effort will resurface, so be watchful and prayerful.

Jane’s Revenge, the same group that attacked pro-life centers, is calling for a “Night of Rage” when the final Dobbs decision is released. They are advocating violence across our country. Let’s all join together and ask God for his protection on Rhode Island.

Wars begin in the heart, and that is where the battle must be waged. God’s D-Day was the day that Jesus was nailed to a cross. The day you make Christ your savior is the day you make peace with God. Only the love of God can change the human heart. Let’s all pray and do our part to help people turn back to God, the Author of Life, so that he can rebuild their lives.

For Faith and Family in RI,

Chairman, Board of Directors