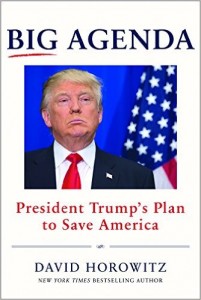 (Daily Caller) – “Conservatives were justifiably worried that America’s decline was reaching a point of no return,” writes David Horowitz. After the recent election, many breathed a sigh of relief, but as the author of Big Agenda sees it, “one battle is over, but there are many more to come.” To prevail, the combatants must want to win, but that has not always been the case with Republicans.

In 2012 Mitt Romney possessed strategic intelligence on his opponent yet failed to deploy it and duly lost the election. In 2016, Romney blasted fellow Republican Donald Trump as “a phony, a fraud,” a charge Clinton gleefully used in attack ads. Veterans of the Bush White House announced that they would vote for Clinton. In the six years they controlled both houses of Congress, Republicans failed to investigate the Clinton Foundation.

Horowitz wonders what Republicans failed to understand about the perils of the nation, and “the destructive agendas of the left that threaten its future.” Here the author draws from his vast experience on the left.

The progressive movement operates on “almost religious convictions,” which is why members move in lockstep, and demonize anyone outside their ranks. The movement divides society into “oppressor” groups such as whites, males, Christians and heterosexuals and victim or “oppressed” groups such as “people of color” and the LGBT squads. For Horowitz this is “the old Marxist wine in new bottles.”

The movement commands almost total control over the Democratic Party and is too powerful for leaders to deviate. For their part, Republicans are afraid of being called “obstructionists” and stigmatized as heartless, racist, or xenophobic. That fear leaves them ill-equipped for conflict with the interlocking directorate of progressive power. But it is possible to take it on and win.

Horowitz charts government union thuggery against Wisconsin governor Scott Walker. Yet Walker “demonstrated the will to stand up to them” and prevailed. Hillary Clinton charged that supporters of Donald Trump were “irredeemable,” a veritable “basket of deplorables.” Trump supporters were “racist, sexist, homophobic, xenophobic, Islamophobic— you name it.”

Trump fired back that “Hillary has tremendous hatred in her heart,” and as Horowitz notes, “never had any Republican dared to characterize a Democratic opponent in such damning moral terms to a national audience.” Trump continued to defy political correctness in brawling style, and he won.

It will take that kind of defiance to “save America,” says Horowitz. To turn around the battles conservatives have been losing for so long, “they must begin every confrontation by punching progressives in the mouth.”

The focus must be the Democrat’s “monopoly control of the inner cities of America and its responsibility for the misery and suffering inside them.” Education vouchers will break control of teacher unions, who now confine captive students in schools that don’t teach.

The IRS “must be investigated and reformed to prevent Democrats from using it to suppress the opinions of their political opponents.” The author calls for prosecution of those IRS officials “who participated in the effort to prevent conservative think tanks and advocacy groups from tax exemptions available to their liberal adversaries.”

Sanctuary cities are “seditious threats to the safety of all Americans,” and elected officials who break the law “need to be removed from office and prosecuted.” In similar style, left-wing Justice Department officials should be fired, U.S. immigration laws enforced, and criminal illegals deported. On this issue President Trump can take guidance from a Democrat, the late Barbara Jordan.

“Deportation is crucial,” Jordan contended. “Credibility in immigration policy can be summed up in one sentence: Those who should get in, get in; those who should be kept out, are kept out; and those who should not be here will be required to leave. The top priorities for detention and removal, of course, are criminal aliens. But for the system to be credible, people actually have to be deported at the end of the process.”

In foreign policy, the battle plan calls for relocation of America’s embassy in Israel to Jerusalem. “It is time to stand up for our one staunch ally in the Middle East,” the author writes, “and recognize that there can be no peace as long as Palestinians support terror and deny Israel’s right to exist.”

On the home front, “the erasure of the American republic is the core agenda of the Democratic Party.” But after eight years of a counterrevolutionary president, can America be saved?

David Horowitz believes the movement galvanized by Donald Trump can stop the progressive juggernaut and change the American future, but only if he adopts the strategy of his campaign: “Be on offense; take no prisoners; stay on the attack.” What matters “is not what we say but what we do.” The stakes are high and “along with Reagan, we must fight to defend liberty in order to bequeath it to the next generation.”