David McIntosh on Leading the Club for Growth

(WNS)–In the 1980s and 90s, David McIntosh, now the president of the Club for Growth, was a rising young star in the Republican Party. After graduating from Yale and the University of Chicago Law School, he went to work in the Reagan administration. He served as special assistant to the attorney general and then as special assistant to President Ronald Reagan himself. When George H.W. Bush became president, McIntosh went to work for the vice president and fellow Indianan, Dan Quayle. He later served in Congress and now is president of the Club for Growth. I had this conversation with him in his office in Washington, D.C. 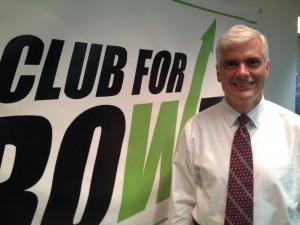 Tell me a little about Club for Growth. The Club for Growth is really the premier policy and political entity supporting economic conservatism, economic liberty, constitutional limited government, and pro-growth policies. We advocate for those, hence the Club for Growth. We have an affiliated political action committee that raises money and supports candidates who are champions of those issues. We supported Sen. Ted Cruz, R-Texas. We support Sen. Marco Rubio, R-Fla., and more recently Sens. Ben Sasse, R-Neb., and Tom Cotton, R-Ark.

You’re fairly new here at Club for Growth. Tell me your vision, your marching orders from your board, your passion as president. I started at the first of the year. I feel in a personal sense it’s what God’s prepared me to do in my life, and it’s to be a servant to others who are going to be in public life and to be someone who discerns who are good leaders that should be helped.

The board has told me, David, we appreciate who you are, but remember we are an economic conservative group, so we’re not asking you to not follow your faith, but we’re not looking for candidates who are social conservatives or conservatives in national security. We focus on economic issues. I shared with them, while I will be true to my faith, and you know my record in public life on those issues, I understand my assignment as president of the club is to focus on those economic issues, and I’m delighted to do it.

Your budget is anywhere from $5 to 10 million a year, maybe a little bit more some years because of the election cycles. That is a lot of money, but by Washington standards, it’s not. How do you get the most bang for the buck? You’re right, we have a much bigger impact than the funds. One, we’re careful about how we spend our funds and are really faithful to the donors when we tell them 90 percent of this is going to go directly into this campaign. By law, I have to spend some of the overhead out of the campaign money, otherwise I’d do 100 percent and raise the overhead somewhere else.

The other thing is, we’re strategic. We first stay focused. Where can we make a difference? We don’t get into every race. Some people, we think, would be good, but they’ve got a pretty easy race, so we let that play out. Some people we think are not good, but it’s hard to win the race against them. A challenger can’t do it because they’re in such strong political positions. So we don’t get engaged there. … We try to leverage the influence we have, work with others, be thought leaders. Sticking to your knitting is really important in a job like this, so we try to do that as well.

You’re not afraid to get involved in the primaries, which means you sometimes have to make some Republicans mad at you by making choices in the primaries. We have, in particular, when they campaigned as lower taxes, smaller government, free markets, and then their votes don’t match up. We run the ads and point out their votes. They don’t like that; they get ticked off at us. Then they say, “Well, you’re going to make us lose the seat to a Democrat.” My view is a strong Republican in a competitive race is better than a duplicitous Republican who says one thing and does something else. I don’t really agree that we’re likely to lose the seats we get into. I think we’ll have a better candidate and a better congressman or senator.

Former Arkansas Gov. Mike Huckabee called the Club for Growth the Club for Greed. What were your thoughts whenever you heard that, and what are your thoughts about that now? The club put out a white paper. We’re doing that now on all the presidential candidates. It pointed out that when Huckabee was in office, he championed tax increases, not tax cuts, and grew the budget in Arkansas. Now, he defends that, and in his book now even says that some of those were the best things he did. But that’s not small government, pro-growth, free-market economics. We put the white paper out, but then we also [ran] ads in the 2008 primary telling the voters about his record, and he really hated that.

Talk about your time in the Reagan administration. President Reagan is my hero. I think he stood for the right approach to American government, which is, follow the Constitution and we will be better off for it. Dan Quayle—working for him taught me how that actually works because my assignment was to oversee all the regulators. I realized this is a horrible process [with] no accountability, and they’re making all these rules and regulations that make it impossible for U.S. businesses to really thrive.

But it’s very hard to undo that, so it taught me about the day-in and day-out of government. Then, when we lost in ’92 … we went back to Indiana. Two years later there was an opportunity to run for Congress. My wife looked at me … and said, “I know you’re going to do this, what does this mean?”

By that time I had completely given my life to God, so I was trying to follow His will, ask Him about that. One of the ways that I felt comfortable was, He would send people to me and say, “I’ve been told I should pray for you.” I remember one lady, Veronica, who did that, and I thought, “Wow! How did this happen?” I’m sure I’ve many times fallen short of that, but I’ve tried to live my life looking for His will and trying to follow it.

You had now-Supreme Court Justice Antonin Scalia as a law professor. What was it like to be his student? It was great and challenging. He would make us debate in class and really focus us to think about the process. Is the process going to let freedom flourish more than the result? That was a big lesson I had to learn in law school. What looked like it was a fair result may not be the right result because the process wasn’t followed.

What was your impression of Dan Quayle? The media kind of knew they had distorted him, but they didn’t want to give him a second chance. Dan’s a lot smarter than his image. He is a caring person. His faith is important to him, and he’s an incredibly good businessman who, when he left politics, has been successful because he can bring people together to make a deal.

One final question: How do you want people to remember you when you’re gone? What came to mind was a movie title. It is my favorite movie, It’s a Wonderful Life. … I’ve tried to live that life. How do you give back? At the same time, I’ve suffered sort of George Bailey suffering. He had to put aside his dreams to live that life. I wanted to be president of the United States. I’m not going to be president of the United States. I’m content about that, the way he became content about that. That would be what I’d like to have people say, “Yeah, he had a wonderful life because he gave back, helped other people.”