(WNS)–Mayor Bill de Blasio is in a strange position. De Blasio has said repeatedly that he opposes the Bloomberg-era policy forbidding churches from renting public school spaces for worship services, while allowing any other groups to use the buildings.

But this week, his administration’s lawyers filed a brief at the U.S. Supreme Court arguing in favor of the policy and saying the Bronx church at the center of the case has no standing to challenge the NYC Department of Education rule.

“The department’s decision to make public schools available to religious organizations for a wide range of activities, but not for worship services or as a house of worship, is constitutional,” the city’s brief says. “The policy does not prohibit, limit, or burden any religious practice; does not entangle the government in matters of religion; and does not impair petitioners’ ability to speak freely.”

The policy was “motivated by reasonable Establishment Clause concerns rather than animus, treated all permit applicants identically, and imposed no burden on any religious practice,” the brief claims.

In urging the Supreme Court to deny the case, the city argued there was no circuit split on the issue, typically a precondition for the court’s consideration. The city also argued schools are a “limited public forum,” which means they can set rules for who participates in that forum. 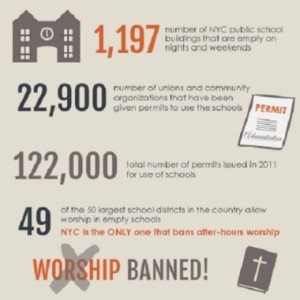 “The administration’s position is that religious organizations should be able to use space in city schools on the same terms provided to other groups,” he said. “The city’s recent filing seeks to preserve its prerogative to issue rules governing the use of public school facilities after hours by various groups, including faith-based organizations.”

Jordan Lorence, an attorney with Alliance Defending Freedom who has been handling the church’s case, said “all their legal arguments are wrong,” particularly that the government could deny equal access to churches in “forums that are open to anyone else.”

“What they’re trying to do is eviscerate the Supreme Court’s equal access doctrine,” he said.

The de Blasio administration could change the policy at any time executively but has not, to date. Right now, churches can rent public schools for worship services thanks to a court-ordered stay on the city policy. But that order could end anytime, depending on the Supreme Court’s actions.

Last year, the Bronx Household of Faith lost its case at the 2nd U.S. Circuit Court of Appeals, but appealed to the Supreme Court. The appeal automatically placed a stay on the 2nd Circuit’s ruling, meaning the district court’s ruling blocking the city policy remained in place. The church has appealed to the Supreme Court unsuccessfully before but on different constitutional grounds.

This is the first time the city has filed court documents on the policy since de Blasio took the reins from former Mayor Michael Bloomberg, who defended the policy in court for years.

In its brief, the city argued that because Bronx Household of Faith has built its own church building, which it began using for services this past summer, the church doesn’t have standing to challenge the policy. The church, based in a low-income neighborhood, built the building after years of back-and-forth with the city over whether it could hold services at the local public school. And the church has continued to rent out space periodically at the school for worship services because its new building is sometimes too small. It is planning to rent space at the school for its Easter service in April.

“If the Supreme Court denies the petition, what will Mayor de Blasio do?” Lorence asked. “That will be interesting to see.”