Demand For Bibles Soars In North Korea Amidst Coronavirus 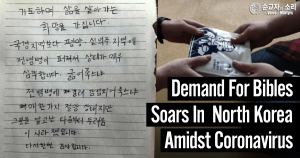 Statistics on the spread of the Coronavirus inside North Korea are the subject of considerable speculation among governments, media, and aid agencies, but according to Voice of the Martyrs Korea representative Dr. Hyun Sook Foley, one fact is well established: Demand for Bibles in North Korea has increased sharply during the pandemic.

“It’s not only masks and medicines that have been in high demand from North Koreans and Northeast China,” says Representative Foley. “In the first three months of 2020 we have already distributed close to 2,000 audio Bibles in the area, which is double the quantity that we distributed in the same period last year.”

Representative Foley notes that Voice of the Martyrs Korea does not do mass distribution of audio Bibles inside North Korea and China but instead distributes them one at a time through specially trained workers to individuals who indicate a desire to receive them.  Representative Foley attributes the surge in demand to what she describes as “a desperate search for any kind of hope amidst the very real possibility of death due to infection” on the part of North Korean people.

“We received a letter from the field this month from a North Korean who received masks and one of our audio Bibles, as part of a special campaign funded by our supporters,” says Representative Foley. “The North Korean man wrote, ‘I receive hope of living as I am praying. The virus situation in Pyongyang and Sinuiju is more serious than the border areas. I think we will all die from starvation or being infected. Both are deadly and cause despair, but after knowing Him, my fear has vanished. We truly thank you again.’”

A North Korean who received our audio Bible says that he has received hope in the midst of the serious Coronavirus situation. “Note that the man who wrote the letter received both masks and an audio Bible from us, but his thankfulness was focused on the Bible,”  says Representative Foley. “Of course that doesn’t mean that medical aid isn’t important, but it is insufficient. People need to hear the word of God at all times, but especially during crisis situations like this. Only the word of God, not a mask, can bring hope in the most fearful times.”