Dental fillings with mercury can cause over 30 chronic health conditions

(NaturalHealth365) If you think the only thing to fear from a dental visit is some discomfort, think again. Conventional dentistry practices, like putting dental fillings loaded with mercury in the mouth, are exposing the body to neurotoxic heavy metals and increasing the risk of systemic infections – which lead to many chronic health conditions. 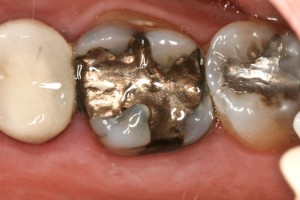 Dental amalgam fillings are made of material containing between 43 and 54 percent mercury, a known neurotoxin. While people with an above average number of fillings are known to excrete as much as 10 times the mercury of someone with no fillings, that level can be reduced by 90 percent if the fillings are removed and replaced with safer material.

To learn more about the dangerous health risks of conventional dentistry and the importance of seeking out holistic dental care, visit the Holistic Oral Health Summit.

The link between mercury-based, dental fillings and chronic illness

The National Institute for Health’s extensive epidemiological study, the third National Health and Nutrition Examination Survey (NHANES III), showed a significant correlation between a number of chronic health conditions and having an above average number of amalgam surfaces. Data from the survey shows dramatic differences in dental filling rates for people affected by a variety of diseases, as compared to the dental fillings rate in the general population.

The conditions in which the number of dental amalgam surfaces were most highly correlated with disease incidence were multiple sclerosis (MS), epilepsy, migraines, mental disorders, diseases of the nervous system, disorders of the thyroid gland, cancer, and infectious diseases. Other conditions where incidence was significantly correlated with above average amalgam surfaces were diseases of the male and female genital tracts, the peripheral nervous system, the respiratory system, and the genitourinary system.

Some of the most common chronic diseases and conditions facing the U.S. population today involve autoimmune problems and immune system failures.  Diabetes, cancer, autism and Alzheimer’s disease continue to affect the population in record numbers. All have been associated with use of mercury fillings.

Amalgam fillings have also been linked to such conditions as arthritis, multiple sclerosis, Lou Gehrig’s disease, Parkinson’s disease and muscle tremors, fibromyalgia and muscle or joint pain, lupus and Crohn’s disease. Symptoms of many of these diseases are easily mistaken for other conditions. In addition, conventional medical treatment focuses almost exclusively on treating symptoms, rather than looking at the root cause, which could be amalgam fillings.

Mercury fillings have also been linked to scleroderma, endometriosis and chronic fatigue syndrome, among other autoimmune disorders. In addition, the use of amalgam fillings has been linked to a higher prevalence of antibiotic-resistant infections, multiple chemical sensitivities, sinus problems and an overall greater susceptibility to infections.

In addition to diseases and disorders associated with the body’s immune system, there are a number of neurological and mood disorders that have been linked to the use of mercury fillings in conventional dentistry. Neuropathy and paresthesia, memory loss, ADD, depression, epilepsy, schizophrenia and even learning disabilities have all been associated with toxic mercury fillings.

Conventional dentistry’s use of amalgam fillings has also been associated with hearing loss and tinnitus. Other neurological and mood disorders linked to amalgam fillings include headaches and migraines; dizziness and vertigo; insomnia; and problems with anger, anxiety and mental confusion.

Use of amalgam fillings are associated with a number of cardiovascular conditions, including hypertension, arteriosclerosis, angina and other heart and blood disorders. Mercury fillings have also been associated with an abnormally rapid heart rate known as tachycardia.

To learn more about the risk to your heart – read: “The number one cause for 90% of all heart attacks” by Thomas E. Levy, MD, JD

Stomach and digestive problems can be triggered by mercury-based, ‘silver’ fillings

You need only walk into a pharmacy or supermarket and gaze at the shelves full of antacids and other over-the-counter stomach remedies to realize that digestive problems and stomach disorders are a major problem. As with treatment of other chronic conditions, the focus is almost always on masking the symptoms rather than getting at the underlying cause.

But, we know there is substantial evidence that mercury fillings can play a role in the development of a number of digestive and stomach problems. Research has shown a link between mercury fillings and leaky gut syndrome, malabsorption of essential minerals and essential fatty acids, blocked cellular enzymatic processes related to the ATPASE energy function and sulfur oxidation.

Toxic dental materials can cause hormonal and reproductive problems

With all of that mercury accumulating inside the body, it is little wonder why people with amalgam fillings run the risk of hormonal and reproductive problems. Among the most common hormonal ailments attributed to amalgam fillings are hypothyroidism, problems with the adrenal gland, hair loss, and Hashimoto’s disease – a condition where the immune system attacks the thyroid. Urinary and prostate problems have also been linked to mercury fillings.

While reproductive issues have a wide variety of causes, conventional dentistry’s use of mercury has also been associated with this condition. Mercury has been linked to reduced sperm counts and other infertility issues, PMS, and spontaneous abortions. This toxic metal has also been associated with birth defects and learning disabilities in children.

Mercury vapor given off by amalgam fillings has been proven to accumulate in high levels in tooth roots, gums, jawbone, and oral tissue. This toxin has been shown to contribute to a number of periodontal diseases and conditions, including gingivitis, oral lichen planus, amalgam tattoos, metal mouth, halitosis and oral ketosis.

Editor’s note: I realize there is lots of information (here) to absorb. To investigate these issues – on a deeper level – I suggest you visit: the Holistic Oral Health Summit to learn how poor oral health can be eliminated to improve immune function and overall wellbeing.