(NaturalNews) America’s once-thriving auto capital has become a third-world catastrophe, with nearly half of its residents now unable to pay their water bills. Reports indicate that roughly 50 percent of Detroit residents are struggling just to keep the water flowing, and some are now suggesting swift United Nations intervention to provide this basic necessity for those in need.

CBS Detroit reports that the Detroit Water and Sewerage Department is routinely having to shut off water mains at homes where residents can’t or won’t pay their water bills. For some, it is simply laziness that leads to their water being shut off, as the city says a good number of folks quickly pay their bills once the tap has been shuttered. But for others, perpetual financial distress in one of the nation’s most distraught cities is the driving factor.

“At the DWAS Department — it’s not our goal to shut off water,” stated Curtrise Garner, a department spokeswoman. “We want people’s water on, just like they do; but you do have to pay for your water… That’s the bottom line.”

Concerned about the well-being of Detroit’s roughly 700,000-and-dwindling residents, local activists have begun demanding that the water department just keep the water on, claiming that it is a “human right.” These same folks are even calling for UN intervention, as if there is no domestic solution to the increasing levels of poverty that restrict access to something as fundamental as water.

The UN is also actively intervening on its own behalf, declaring the Detroit water cutoffs to be a violation of human rights. In a recent press release, UN officials proclaimed that the disconnection of water services is a “violation of the human right to water and other international human rights,” suggesting that it must get involved in the situation.

If Detroit ended its fluoridation program, water would be more affordable 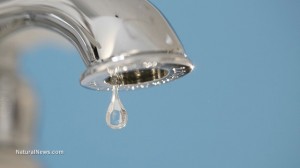 Detroit does have higher-than-average water rates compared to the rest of the country. According to CBS Detroit, the average Detroit water bill now hovers around $65 per month, while the national average is only $40, making it a relatively expensive place to live considering its shattered economy.

But other factors such as water fluoridation, on which Detroit spends roughly $350,000 annually, based on the standard fluoride cost chart provided by the U.S. Centers for Disease Control and Prevention (CDC), are also keeping water costs high. If Detroit eliminated this caustic poison from its water supply, water costs would drop and become more affordable for everybody.

Besides the costs of the fluoride itself, which is typically imported from China as industrial waste, the equipment used to pipe it into water systems requires constant maintenance due to corrosion. The same goes for city pipes, which have been found to degrade as a result of constant exposure to fluoride. This is why the village of Pulaski in New York, for instance, decided to stop fluoridating its water back in 2012.

“It takes large amounts of money,” stated Pulaski Mayor Karl Hax to WSYR NewsChannel 9 about the costs associated with replacing fluoride-corroded pipes. “We tried to get money from the state, from the federal government, with no luck to help with our water system. So at this point, we have to err on the side of caution.”

Perhaps Detroit should take a cue from Pulaski and drop the fluoride from its water supply as well, especially before agreeing to allow UN intervention into this civic matter.