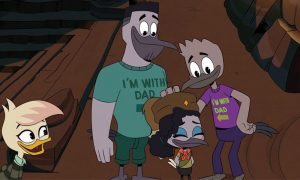 The episode “Challenge of the Senior Junior Woodchucks” introduced the men, who wear t-shirts that read “I’m with Dad” with arrows that point to each other. The men also adopt Violet’s best friend, Lena, who refers to her in one scene as “[m]y sister from a couple of misters.”

In the broadcast, Violet, voiced by actress Libe Barer, competes against Huey for the title of Senior Woodchuck. While staying ahead for most of the wilderness challenge, she risks a loss after seeing Huey in trouble and stops to save him from falling into lava.

Violet offers to inquire if she and Huey could both be named senior woodchucks, but Huey happily hands her the win and asks for a “failure badge” from Launchpad.

Frank Angones, the co-executive producer and story editor of “DuckTales,” acknowledged in November that Violet is depicted as having two men for parents, stating that he realizes some won’t like them as being “background characters” but outlining that he has other plans to represent homosexuality in story lines in the future.

“Want to be very up front and honest about this: Violet’s dads are present and show up but do not play a huge role in the story thus far. As with all of our characters, we had a lot of conversations about who Violet was and what her background was and came up with this fun notion of her too enthusiastic, overly supportive dads who love being dads,” he wrote in response to a question on Tumblr.

“We didn’t really have a story built around them, but when the time came for an episode focusing on Huey and Violet in a particular situation, it made sense that they would be there … But I’m well aware that the ‘queer representation through parents and background characters’ trope is an issue, and we’ve sort of stumbled backwards into a lot of heteronormative romances in this show due to legacy characters with pre-existing relationships … ”

“But that’s really no excuse,” Angones said. “We’ve done pretty well on racial diversity and representation of people with limb differences, but we really have not done enough relevant LGBTQ+ rep. We do have some themes and ideas coming up that address relevant LGBTQ+ narratives. But there’s always opportunity for a lot more; I don’t want a cop out and a cookie for saying ‘look at this one thing we did!’”

The group One Million Moms has launched a petition to Disney CEO Bob Chapek over the depiction, generating over 18K signatures as of press time. “I do not agree with the LGBTQ agenda you are forcing on families and children in the reboot series DuckTales,” it reads. “My family will not watch DuckTales nor support your company as long as the network veers away from family-friendly entertainment. I will encourage my friends to do the same.”

As previously reported, homosexuality has increasingly made its way into children’s programming in recent years. In 2017, the preschooler-geared cartoon “Doc McStuffins” featured an animated depiction of the lesbian moms of two children. That same year, “Star vs. the Forces of Evil” included a scene where two boys locked lips, as well as two girls.

Last year, “My Little Pony: Friendship is Magic” featured lesbian aunts during its final season, and Mr. Ratburn, the elementary school teacher in the long-running PBS children’s cartoon “Arthur” came out as homosexual, “marrying” an aardvark named Patrick in the episode “Mr. Ratburn and the Special Someone.”

The season finale of Andi Mack depicted Cyrus and T.J. realizing their feelings for each other and holding hands, and the Disney-Pixar film “Onward,” which centers on wizardry and necromancy, also features a line where a cyclops police officer — voiced by a homosexual screenwriter — subtly reveals to viewers that she is a lesbian.

Besides its more recent inclusion of homosexuality in its productions, Disney, known for its “Magic Kingdom,” has been recognized for decades for its focus on magic, sorcery and witchcraft, from its early production of “Fantasia” and “Snow White” to the present-day “Maleficent” and “Frozen.” Like homosexuality, the Bible also forbids the practice of sorcery and witchcraft.

Ephesians 6:4 teaches that parents are to raise their children “in the discipline and instruction of the Lord.” Psalm 78 also outlines that God’s law is to be passed down from generation to generation, that children may not rebel against the Lord as their fathers once did.

“He established a testimony in Jacob and appointed a law in Israel, which He commanded our fathers, that they should make them known to their children, that the generation to come might know them — even the children which should be born, who should arise and declare them to their children,” it declares.

“That they might set their hope in God, and not forget the works of God, but keep His commandments, and might not be as their fathers, a stubborn and rebellious generation — a generation that set not their heart aright, and whose spirit was not steadfast with God.”