“… Christians have been deprived of their rights …”

Writing on the website WND, Dobson recounted a June meeting in which he met with Trump and other Christian leaders at Trump Tower in New York City.

At the meeting, he told Trump, “Our Supreme Court has struck down Bible reading in schools and even prohibited prayer to an unidentified God. Then, they banned the posting of the Ten Commandments on bulletin boards. From there, the limitation on religious liberties has become even more egregious,” he wrote.

“Most recently, President Obama and Hillary Clinton have been referring to ‘freedom of worship,’ rather than ‘freedom of religion.’ Do you understand their motive? They are suggesting that Americans are free to worship in their churches and synagogues, but not in the public square,” he told Trump. 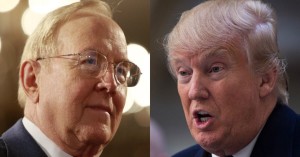 He said that Trump responded by calling it an “outrage that Christians have been deprived of their rights to speak openly on behalf of the values and principles in which they believe.”

Dobson noted that Trump criticized the Johnson Amendment, a 1954 piece of tax code that bans political participation by churches, as well as other tax-exempt not-for-profit groups. The amendment was supported by then-Sen. Lyndon Johnson, D-Texas.

Dobson said Trump’s promise to overturn the amendment “would have a great impact on Washington because it would unleash Christian activists to fight for their beliefs.”

Trump has kept faith with the ministers with whom he met. The Republican platform includes a plank to abolish the amendment.

Jerry Falwell Jr., president of Liberty University, has said that eliminating the amendment “is almost as important for Christians as the appointment of Supreme Court justices.”

Trump himself has said that ending the ban can be a catalytic moment for religion in America.

“I think maybe that will be my greatest contribution to Christianity — and other religions — is to allow you, when you talk religious liberty, to go and speak openly, and if you like somebody or want somebody to represent you, you should have the right to do it,” Trump told Dobson and the other clergy at their June meeting, saying religious leaders in America were “petrified” of running afoul of the ban.