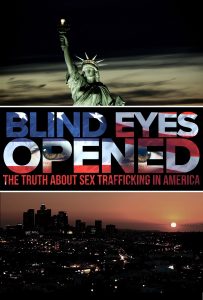 TAMPA, Fla. – There are more than 4.8 million people being sexually exploited worldwide, and more than one million of these are children (International Labour Organization). According to a recent report by the US State Department, the United States is one of the leading consumers of sex trafficking, as well as leading country of origin for victims. On January 23, 2020, Ships of Tarshish will present BLIND EYES OPENED: The Truth About Sex Trafficking in America, a first-of-its-kind look at the dark roots of sex trafficking, in a one-night-only cinema event.

“Once you’ve learned how to recognize human trafficking, you begin to see it everywhere – it’s in every single community,” said Executive Producer of BLIND EYES OPENED and CEO US Institute Against Human Trafficking, Geoffrey Rogers.

Six years in the making, BLIND EYES OPENED is a feature-length documentary exploring the growing epidemic of modern-day slavery, the industries feeding as well as fighting it, and the shocking scope of its infiltration into every segment of the U.S. population. Contrasting the darkness, however, the film reveals the power of the Gospel of Jesus Christ to bring healing for victims and freedom to the captives.

BLIND EYES OPENED features multiple stories of survivors whose journeys with trafficking began when they were small children, many whose parents served as pimps. From runaways and children in the foster care system, to average middle-school girls being recruited under the noses of adults, trafficking of children in the United States has reached epic proportions and concerned parents cannot afford to turn a blind eye.

“They stole my purity, my childhood; the joy you’re supposed to have as a child,” one victim, Edie, remembers. “There were lots of opportunities for people to see, but they looked the other way.”

The only hope for ending this crisis, says dozens of experts, survivors, government leaders and non-profit ministries featured in BLIND EYES OPENED, is a commitment from the church to intercede and intervene in the world of trafficking. This happens when efforts are made to end the “demand” by tackling the issue of pornography; reducing the “supply” by strengthening families, engaging in the foster care system, and ministering to sex trade workers; and aiding in restoration of victims by supporting recovery efforts and ministries.

“We absolutely need the church to engage in this crucial battle; but first, followers of Christ have to allow themselves to see the problem, and that’s what this movie aims to do,” said Executive Producer and Writer of BLIND EYES OPENED, Kerri Rogers. “If we’re going to truly overcome the evil of sex trafficking, hearts have to change; and this only happens through the love of Christ.”