Documentary Outguns the Opposition in the Global-Warming War 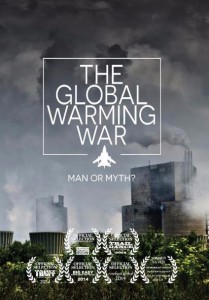 Once a learned phobia takes root, convincing its believers of the truth is nearly impossible, but the producers of a new documentary may have found the key. Their well-researched and creatively presented video The Global Warming War defies dogmas of the most hardened climate-alarmist faithful. Testimonials by dozens of scientists, government advisors, and other climate experts, including exclusive interviews with the founders of The Weather Channel and the World Rainforest Movement, expose the myth of “consensus” and prove the strength of scientifically skeptical arguments.

“There is so much unfair reporting that comes from the mainstream media, and climate change is being influenced more by politics than actual climate science,” producer Luke Dillard of South House Entertainment told The New American. “I wanted to make a documentary that outlined the actual science, without all of the political obscuration.”

Dillard has certainly achieved his goal. The video opens with a warning issued in 1961 by then-President Dwight Eisenhower — part of his farewell address to the nation — about a government-funded “scientific-technological elite.” His words set the stage for the 88-minute documentary, separated into 14 well-organized chapters that cover all facets of the climate-change debate. Using state-of-the-art graphics and input from experts and professionals in related fields, each section reveals actual data and research that debunk widely accepted fictions. Polar bears aren’t dying off, ice caps aren’t melting, temperatures aren’t spiraling upwards, rates of extreme weather events aren’t skyrocketing — in short, the sky isn’t falling.

But that is only the tip of the iceberg. The Global Warming War also discloses bureaucratic chicanery masked as environmentalism, which is forming economically and socially destructive policies in the United States and worldwide. It emphasizes the urgent need to disentangle the public from their ingrained weather phobias.

The Global Warming War is the latest of a number of comprehensive documentaries that methodically disprove the claims of catastrophic human-caused climate change propounded by Nobel Peace Prize laureate Al Gore in his 2006 Oscar-winning film, An Inconvenient Truth. For many within the scientific community, it would seem that Gore’s propaganda piece did little more than discredit as political panderers both the Norwegian Nobel Committee and the Academy of Motion Picture Arts and Sciences. Not so in the public arena; Gore’s nonsense proves the old saying, “There is nothing so absurd that it cannot be believed as truth if repeated often enough.” Pew Research polls in late 2014 found that nearly half of Americans rate global climate change as a major threat. And even more discouraging is that worldwide, Americans rank “among the least concerned” about it.

In reality, Gore himself is not concerned at all about any capitalism-caused catastrophic global warming. The Global Warming War includes a map that plots the location of his San Francisco luxury condo, purchased the same year that An Inconvenient Truth was released. It sits right in the middle of the area that should be flooded by now had his predictions of melting ice caps been accurate. Frankly, the documentary writers let him off easy by omitting mention of his carbon-guzzling mansions in the suburbs of Nashville, Tennessee, and on the beachfront at Montecito, California.

But the Inconvenient cloud has a silver lining. Gore’s absurdities have spurred climate realists to action, exposing his errors in documentary gems such as British public television’s The Great Global Warming Swindle, Sovereignty International’s Global Warming or Global Governance?, the Competitive Enterprise Institute’s Policy Peril: The Truth about Global Warming, Christopher Monckton’s Apocalypse? No!, Sean Hannity’s The Green Swindle, and an independent 2009 production about climate alarmists with the self-defying title Not Evil Just Wrong.

Yet with so many other documentaries already existing on the same subject, The Global Warming War may seem like overkill. Why the need to rehash? The problem is that none has ever equaled in popularity the undeserved fame of An Inconvenient Truth. It’s hard to compete with an Oscar, a Nobel prize, and vast ongoing publicity backed by the bureaucratic “scientific-technological elite.”

The outcome: People are convinced their supposedly gluttonous craving for energy is destroying the planet. So they accept ethanol-laced gasoline that inflates fuel costs and destroys small engines, “smart” meters that open the door for illegal government surveillance of private citizens, light bulbs that make our homes look like morgues, so-called high efficiency washing machines that don’t clean clothes, and low flush toilets that clog and reek of sewage. Corn subsidies have backfired to the point that even liberal Democratic Senator Dianne Feinstein has introduced a bill to eliminate the corn ethanol mandate in the Renewable Fuel Standard, which, according to a recent Congressional Budget Report, creates a $3.5 billion increase in food costs for Americans. And while federal spending on climate change dwarfs government expenditures for necessities such as border security, and results in boondoggles such as Solyndra, the U.S. Energy Information Administration (EIA) forecasts that the past two years’ record-breaking electricity prices will continue their upward climb in 2015 and 2016, thanks to government-mandated feed-in tariffs for costly and inefficient so-called renewables such as wind and solar.

EIA reports electricity prices in Europe are increasing at an even higher rate, hardly surprising since so many countries there have embraced the climate-change charade. Praised by President Barack Obama for its green economy, Germany now has the second highest electricity prices in Europe, prompting its newspaper Der Spiegel to declare electricity “a luxury good.” Renewable portfolio standards in France result in consumers paying more than twice the market value for the energy they use.

Documentaries such as The Global Warming War could help turn this self-destructive tide, which amounts to energy rationing, rationing that not only lowers standards of living in developed nations but also breeds poverty and death in the developing world. Tim Ball, Ph.D., science advisor to the documentary, told The New American that the political agenda of the environmental movement is clear. “There are a multitude of factors that create daily weather,” from cosmic radiation to geothermal heat. “Climate is the net result of all these,” he explained. Yet environmentalists focus their energies on the “narrow and unsupportable” hypothesis that climate is dictated mainly by carbon dioxide. Their efforts to demonize a naturally occurring, life-sustaining atmospheric gas reveal their goal to be something other than saving Mother Earth. Analysts appearing in The Global Warming War agree that the aim of the environmental movement, as it exists today, is to restrict access to energy. 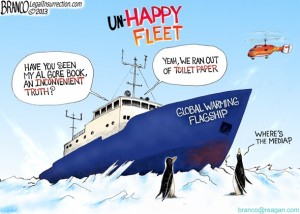 “It’s obscene, immoral and fundamentally racist,” laments publisher and political strategist Marc Morano, who relates the story of multi-millionaire producer/director James Cameron traveling to Brazil to protest a hydroelectric plant intended to provide energy and clean water to millions. Morano points out the hypocrisy of wealthy nations rationing energy and dictating that poor countries live in harmony with the Earth. “The bottom line is, they are living in harmony with the earth. And when humans live in harmony with the earth, it’s death, disease, poverty, misery and short life expectancy in filth.”

Dillard wants his documentary to change lives by exposing the truth. “I hope it inspires the United Nations to ease its regulations and sanctions on the impoverished nations,” he wrote in an e-mail to The New American. “People who are in poverty are the ones who need access to electricity the most, but they’re being told they can’t have it because of this pseudo-scientific global warming hypothesis.”

The Global Warming War won the 2014 best documentary feature film award at the Big Easy International Film Festival, a significant accomplishment considering that organization touts itself as “green.” The documentary has garnered other honors: a silver medal from the 2014 International Independent Film Awards and the Royal Reel Award from the 2015 Canada International Film Festival, along with official selections in five other U.S. film festivals. Both trailer and video can be accessed through the website www.theglobalwarmingwar.com.