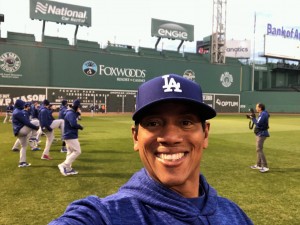 BOSTON (BP)– Luis Ortiz stepped into the shadow of the Green Monster at Fenway Park in Boston 25 years ago to make his Major League debut with the Red Sox.

His career as a player, shortened by injuries and a playing field that wasn’t always level, never blossomed. In an era when steroids abounded, Ortiz refused to take shortcuts to success.

Tuesday night (Oct. 23), Ortiz stepped onto the field in Fenway Park once more, this time as the assistant hitting coach for the Los Angeles Dodgers — his childhood dream of making it to the World Series finally realized. The Dodgers lost 8-4 in the opening game of the series. They play again tonight.

Ortiz was a member of the Texas Rangers organization that made the World Series in 2010 and 2011, and he earned a World Series ring then. But this time he’s actually in the dugout and in uniform as the Dodgers and Red Sox square off in the Fall Classic.

“You play professionally, and you think you’re going to play in the big leagues and then eventually you’re going to go to the World Series,” Ortiz said. “And 25 years later, this is the first time that really, really happens.”

A product of Union University, affiliated with the Tennessee Baptist Convention, the native of the Dominican Republic said he grew up in a predominantly Catholic environment. But it was at Union, when he started going to chapel and encountering people with a more vibrant Christian faith, that he began to grow in his relationship with the Lord.

It wasn’t an instant transformation, but more of a process. “My wife helped me with that, and my friends and Union, and examples of some of the godly men who I was exposed to there,” Ortiz said. “And since then I try to live it every day.”

Ortiz and his wife Susan, whom he met at Union, have been members of Colleyville Presbyterian Church in Colleyville, Texas, for more than two decades.

Ortiz was drafted by the Red Sox in 1991 after his junior year of college. He advanced quickly through the Boston farm system. But his big league career never gained momentum. He played in 16 games for Boston in 1993 and 1994 before moving to the Rangers for the next couple of seasons and then bouncing around in the minors and in Japan for the rest of his playing career.

“It was such a difficult time to play because there were so many guys doing it the wrong way,” Ortiz said, referencing the rampant use of performance-enhancing drugs. “And you’re competing in an environment that wasn’t fair. But I also grew up with a mom who always said life is not fair, and you’ve got to make the best of it.”

Ortiz sometimes felt like he was fighting in a war with an arm tied behind his back while his opponent had a machine gun. Avoiding steroids for Ortiz wasn’t a medical issue but a moral one. Though the temptations were always present, and though it would have been easy for him to succumb, he refused.

Though his convictions may have left him at a physical disadvantage, Ortiz decided to try to gain the upper hand intellectually. He began reading and studying the game of baseball, asking the right questions and outworking others when it came to learning about the sport. After his playing career, he ended up writing four books about hitting and opening a baseball school in Texas.

Eventually, Ortiz got into coaching at the Major League level, in various capacities with the Rangers, Indians and Padres, before the Dodgers hired him last December. But that came after he returned to Union in 2003 and 2004 to finish his degree, becoming one of the first Major League players from the Dominican Republic to graduate from college.

“I was trying to build that bridge between my professional baseball career and my career after baseball,” Ortiz said. “And also, it was a gift for my mom who wanted me to graduate. It was really difficult for her and my dad to graduate, just because of where they’re from and how poor they were, so that was for her.

“It’s more of a proud moment to me that I had graduated than played in the big leagues.”