(WNS) — President-elect Donald Trump started his Inauguration Day with a tweet: “It all begins today! THE MOVEMENT CONTINUES – THE WORK BEGINS!”

Trump’s pre-dawn social media message offered a modern spin on a day shaped by history and tradition—a fitting combination for the man who staked his claim to the Oval Office with a pledge to upend the status quo.

But the rest of the day promised to be much more formal and scripted. Not long after sending out his morning tweet, Trump headed to church with his family. The service at St. John’s Episcopal Church, across from the White House, customarily kicks off Inauguration Day ceremonies, although Trump’s detractors decried the church’s decision to participate in the day’s events. The Rev. Robert Jeffress, a vocal Trump supporter during the campaign and pastor of First Baptist Dallas, led the service and preached a sermon from Nehemiah titled “When God Chooses a Leader.” 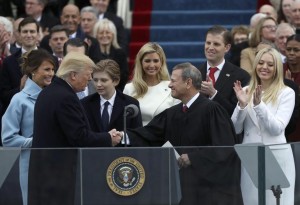 U.S. President Donald Trump shakes hands with U.S. Supreme Court Chief Justice John Roberts (R) after being sworn in as president with his wife Melania, and children Barron, Donald, Ivanka and Tiffany at his side during inauguration ceremonies at the Capitol in Washington, U.S., January 20, 2017. REUTERS/Carlos Barria

After church, the Trumps headed to the White House for tea with President Barack Obama and first lady Michelle Obama, another Inauguration Day tradition. The two couples traveled together to Capitol Hill for the noon swearing-in ceremony. Trump planned to keep his inaugural address short—just 20 minutes—and focus more on philosophy than policy. Spokesman Sean Spicer said the new president would talk about his vision for what it means to be an American.

As a light rain fell on the nation’s capital, Trump supporters mixed with protesters along streets and on the National Mall. Some protesters wearing orange jumpsuits with black hoods over their faces tried to block visitors from getting through security checkpoints. Police in riot gear kept a conspicuous watch.

Trump arrived in Washington on Thursday and spoke to supporters at a concert at the Lincoln Memorial. He joked about the downpour forecast for Inauguration Day and repeated one of his post-election pledges: “We’re going to unify our country.”

President Donald Trump used his inaugural address to make sweeping promises about America’s future, pledging to unify the country with a rising swell of patriotism.

Trump took the oath of office with his hand placed on two Bibles, one belonging to his family and one used during President Abraham Lincoln’s inauguration.

At 11:30 a.m. President-elect Donald Trump arrived at Capitol Hill in preparation for taking the oath of office at noon. While the soon-to-be-president had tea with his predecessor, Barack Obama, supporters and other political dignitaries began filling up the rows of chairs in front of the inaugural stage.

Hillary Clinton, on stage at the inauguration with her husband, former President Bill Clinton, took to Twitter to explain her decision to attend the ceremony: “I’m here today to honor our democracy & its enduring values. I will never stop believing in our country & its future.”

Other former presidents, including Jimmy Carter and George W. Bush, were also in attendance, along with their wives. The only former president missing was George H.W. Bush, who was hospitalized in Houston, recovering from pneumonia.