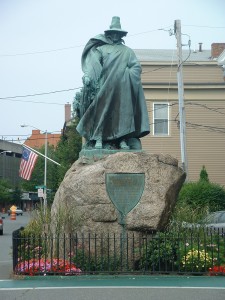 Roger Conant, Founder and First Governor of Salem, Of the First Wave of Pilgrim Immigrants, Arriving in 1624 on the Charity.

According to various sources, including Wikipedia, Roger Conant was a devout and temperate Christian leader who led an exodus from the original Plymouth Colony to avoid violence and “fanaticism” that had emerged under the leadership of the “hot tempered” and allegedly un-Christian Captain Miles Standish.  Moving first to Nantasket and Cape Ann, and then to the North Shore, Conant founded Salem in 1626, building its first house, in 1628 and the First Church of Salem in 1639.

“Europeans first settled [what would become Salem] in 1626, when a company of fishermen arrived from Cape Ann, led by Roger Conant. Conant’s leadership provided the stability to survive the first two years, but John Endecott, one of the new arrivals, replaced him by order of the Massachusetts Bay Company. Conant graciously stepped aside and was granted 200 acres…of land in compensation. These ‘New Planters’ and the ‘Old Planters’ agreed to cooperate, in large part due to the diplomacy of Conant and Endecott. In recognition of this peaceful transition to the new government, the name of the settlement was changed to Salem, a Hellenized form of the word for “peace” in Hebrew (שלום, shalom) which is mentioned many times in the Bible and associated with Jerusalem.” 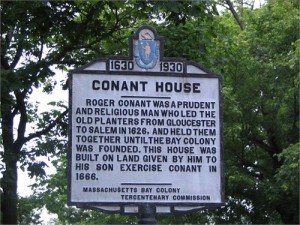 Said Dr. Lively: “I’ve always been proud of my New England heritage, and frequently cited my Uncle Thomas Lively’s book on the history of my father’s family to showcase our arrival in Quebec in the 1630s and subsequent migration south to Massachusetts five generations ago.  I had always assumed my mother’s family arrived in the 1800s but just this week my son Samuel did some research on my mother’s family history and discovered our direct link to Roger Conant.

“What is most remarkable is the close parallel of his personality and mine, given that my first area of specialty in practicing law was mediation and arbitration which depends almost entirely on an inherently diplomatic nature.  And, of course, we both founded Christian churches with a firm Biblical worldview.

“So as of today, I am delighted to report that I am in fact not a 5th but an 11th generation Bay-Stater, with an orientation toward Massachusetts governance in my blood.”

I ask for your vote in November.