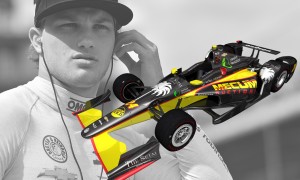 CARMEL, Ind. – Dreyer & Reinbold Racing and Kingdom Racing continued their partnership in the 101st Indianapolis 500 Mile Race on May 28 at the historic Indianapolis Motor Speedway. Sage Karam, the 22-year-old driver from Nazareth, Pa., returned to drive the No. 24 Mecum Auctions DRR Dallara powered by Chevrolet.

This marks the sixth time that Kingdom Racing and DRR team up in the “Greatest Spectacle in Racing.” The pairing with DRR has yielded two top ten finishes plus a sensational drive from the 23rd starting position to fourth by Karam in last year’s 500 prior to being forced into the south end wall on lap 94.

The Dreyer & Reinbold family has an Indy 500 legacy dating back to the 1920s with famed car builder Floyd “Pop” Dreyer. Dennis Reinbold, Dreyer’s grandson, has been a car owner in the “Greatest Spectacle in Racing” since 2000 and has successfully qualified 37 entries in the race. Dreyer & Reinbold Racing, a past winner in the Verizon IndyCar Series, has recorded four top-ten finishes in the Indy 500 including fourth in 2012, seventh in 2010, eighth in 2008 and ninth in 2014.

“It was an easy decision to work with Kingdom Racing again this year,” said Reinbold. “They are a positive group to work with at the Speedway and we greatly appreciate their continued support in the 2017 Indy 500.”

In 2008, Kingdom Racing made history as the first faith-vision team to ever compete in the Indianapolis 500. Kingdom Racing, making its 10th Indy 500 appearance as a participant, hosts multiple ministry events, festivals and appearances at race tracks this season and in partnership with churches throughout the United States.

“This year marked Kingdom Racing’s tenth consecutive appearance at the Indianapolis 500, which is a powerful testimony for the work and dedication of the team,” said Davey Hamilton, Kingdom Racing’s Managing Director. “We look forward to another strong run in the 101st Indy 500 with Sage and the Dreyer & Reinbold Racing team.”

After the running of the 101st Indianapolis 500, Sage Karam made some comments:

“Well, the race didn’t go as we wanted Sunday at the greatest race track in the world. I was hoping to get to the finish but our No. 24 Mecum Auctions DRR Chevy had an alternator let go and the engine just stopped on lap 125. Not much I or the Dreyer & Reinbold Racing team can do much about that. Just some tough luck.”

“This was my fourth Indy 500 and I was still the youngest driver in the field at age 22. But I felt so much calmer and not as anxious as in previous years. Don’t get me wrong, it’s the biggest race in the world and every driver is anxious for the start.”

“Unfortunately, things started off a little rough for us when we had a radio problem. I could hear the pit box and the spotters in the corners but they couldn’t hear me. So, we had to work on a code to communicate with each other on the fly. Just keying up the radio for yes or no and turning fuel mixture switch for more wing, less wing, rear wing and front wing. It was kind of sketchy out there but we were doing okay. We were running inside the top 15 and the top 10 shortly but something was killing the battery in the car and killed the radio.”

“So, an electrical gremlin put us out of this one. The car was really good all month. It’s a shame – the DRR boys, Mecum Auto Auctions put together a great car this month. It’s tough to see it go down like that. But that’s racing. The beauty of this place is it makes you want to come back more and more because you go through all these hard times. You just want to win. So, after I got back to the DRR garage, I was cheering on Fernando Alonso because I’m a big fan of his. But he had trouble too.”

“A lot of people were doing risky things out there. I backed out of about four or five situations that could have caused a big crash. My plan was to get into the top-10 by lap 150 or so. We were moving up the field and the race car was good.”

“I played it conservative around many of them. I’m not going to point out some of the them by name, but it was downright scary in certain places. I thought there were going to a bunch of big wrecks if that stuff continued.”

“Speaking of wrecks, I was so thrilled to see my friend Scott Dixon jump out his race car after that wild crash. Scott is one of the best drivers in IndyCar history and truly one of the nicest guys too. That was a scary ride for Dixey. I will be so glad to talk with him at the Indy 500 Awards banquet. And was so happy that Sebastian Bourdais was back at the track for the race too. His crash was so nasty and it could have been a lot worse.”

“Well, I enjoyed this year’s Indy 500 experience and just wish it could have finished up better. But that’s racing. I’ll plan to be back again in 2018. Now, it’s off to the streets of Belle Isle for the IMSA WeatherTech Sports Car Championship race, I’ll be racing in the Lexus sports car for 3GT Racing.”

For more information, visit www.KingdomRacing.net or join their social media fan communities at ‘KingdomRacing’ on Facebook and Twitter.