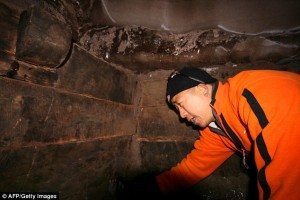 This picture released by the evangelical group claims to show one of the explorers examining part of a structure which they claim might prove the existence of Noah’s Ark on Mount Ararat. There are no external images of the site and the Hong Kong-based group refuse to say precisely where they made their discovery until the Turkish government designate it an archaeological site.

HILVERSUM (THE NETHERLANDS) – By the end of March 2014, a team consisting  of Turkish, Dutch and Belgian members launched an expedition on Mount Ararat, Turkey and found at an altitude of 4.000 meters remains of a possible wooden structure and also pottery.

Jeroen Rensen, a Dutch archaeologist from the team, was pleased with the success of the expedition. He says, “It was very tough. Heavy winds and snowstorms made the first two attempts to reach the site fail. The third and last

all-or-nothing attempt succeeded and the team reached the location. There, in a fissure within the icecap under 10 meters of rock, ice and snow we found well preserved wooden remains and pottery too.”

Later this year a major scientific expedition will conduct a follow-up investigation to determine what the artifacts and wooden remains constitute.

Another witness is a Belgian physician, Dr. Marcel Verheyen. In response to the critics that wood and artifacts were deliberately planted, he says, “That is absolutely impossible. The mountain’s terrible terrain is rather inaccessible, let alone to carry beams of wood. You need to be there and see it with your own eyes, before you put forward any hypothesis. I am 100% sure that it is impossible to plant such a structure there.”

Recent reports of discovery of wood remains on Mount Ararat were made in 2010 by a Hong Kong based Christian group, NAMI (Noah’s Ark Ministries International), yet the finding has been overshadowed by lot of criticisms. The site documented by Rensen and Verheyen in March is in the vicinity of the claim made a few years back.

The snow-capped peak of Mt. Ararat. The discovery is said to have been made 12,000ft up the mountain which lies in eastern Turkey.

Participating in the expedition as independent investigators, Rensen and Verheyen do not want to engage into the controversy, but conduct a step-by-step scientific exploration with a multi-disciplinary scientific team. Rensen says, “The question of whether there are any wooden remains at all on Mount Ararat has been answered. But so many questions still remain. The main question to be answered now is: Whattype of site do the remains at this location represent?”

Walter Tiemessen, a veteran Dutch media expert, has been following the development of the discovery for 4 years, and is determined to find out the ultimate truth. “Many people immediately relate the discovery of wood specimens on Mount Ararat to Noah’s Ark, but I will not jump to any conclusion. The more I studied the evidence from the mountain, the more I believe it is something very special. Be it the Ark of Noah or not, it definitely deserves careful investigation without bias. We need community support for our endeavor, so we will be able to reveal the truth to the world.”

Crowdfunding has been proven to be a successful source to finance creative and science projects. Tiemessen says, “With sufficient funding, we can make the scientific exploration happen, and the whole process will be documented on video. Everything will be under strict scientific protocol. Only then can we provide a satisfactory answer to the curious world. And I expect the project on Mount Ararat will be carried on for many years to come, it is only the first step to take.”

For additional information about the initial discovery by NAMI visit For more information, latest video, photos and expedition plan of the project, please visit