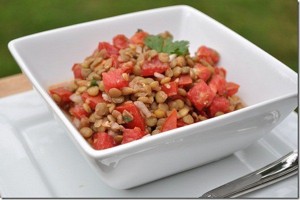 (NaturalHealth365) Replacing starchy carbohydrates like rice and potatoes with lentils could have a significantly positive effect on your health. A recent study out of the University of Guelph has found incredible benefits – in terms of balancing blood sugar levels, and other studies have shown lentils can help to prevent cancer.

Even swapping out half of a portion of typical (less nutritious) carbs for a healthy portion of lentils could lower blood sugar levels by as much as 35 percent, according to research out of the University of Guelph.

And, as you may already know, lowering the glucose response is a key component of fat burning, optimizing metabolism and maintaining an ideal weight. For example, replacing a half serving of potatoes with lentils caused a 35 percent drop in blood glucose levels – while swapping out half a serving of white rice resulted in a 20 percent drop.

Lentils, also known as pulses, are extremely nutrient-dense. They show tremendous promise as a natural way to regulate blood glucose levels as well as associated chronic diseases such as metabolic syndrome and diabetes.

Glucose levels in the participants were measured before each meal as well as two hours after. This process was then repeated with potatoes instead of rice. The result? Blood sugar fell even more significantly when starchy potatoes were replaced with half lentils.

The researchers say that lentils have the effect of slowing digestion as well as the release of sugars found in foods like potatoes and rice. This has a positive effect on blood glucose levels, regulating the spike that would otherwise occur from ingesting twice the carbs.

Their high fiber content also encourages the production of short-chain fatty acids, which helps reduce glucose levels in the bloodstream. And, by the way, all of these results were published in the Journal of Nutrition.

Other research has shown eating lentils can help to prevent cancer. A study of more than 90,000 premenopausal women published in the International Journal of Cancer found eating legumes – twice a week – reduced breast cancer risk by 24 percent.

A Norwegian study found a reduction in cancers of the upper digestive tract in those who ate lentils regularly. Cancers of the mouth, throat, esophagus and larynx are reduced by an impressive 37 percent when this potent legume is consumed regularly. And, colon cancer risk is decreased by as much as 47 percent.

Interesting to note: it’s believed that the selenium content in lentils aids in the reduction of inflammation while raising T-cell production.

Adding lentils to your diet could have profound effects for your health, regulating blood sugar and reducing cancer risk significantly.

Consider adding them to your favorite stews and soups, blending them into gravies and sauces, or tossing cooked, cooled lentils into salads. You can also blend them with onion, garlic and seasonings to make a delicious vegetable dip.