Ebola-Infected Doctor Released From Hospital, Thanks God For His Miraculous Recovery

American missionary doctor Kent Brantly thanked God for his recovery from the deadly Ebola virus as he was released from Emory University Hospital, where he has been treated the last three weeks. 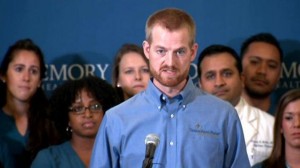 Dr. Kent Brantly delivers remarks as he is released from hospital.

“Today is a miraculous day,” said a beaming Dr. Brantly as he was released from his isolation unit at the hospital. “I am thrilled to be alive, to be well and to be reunited with my family.” At times, Dr. Brantly fought back tears as he expressed his gratitude.

Dr. Brantly looked remarkably well upon his release, with no obvious physical signs of the intense health battle he endured over the last month.

Nancy Whitebol, who also served Ebola patients in Liberia and became infected, was released from the same hospital Tuesday, and said, “To God be the glory” upon her release. She chose not to make a longer public statement as she and her husband David left for an undisclosed location.

Whitebol’s physical condition was described as somewhat weaker than Dr. Brantly’s when she left the hospital.

On August 18, the World Health Organization reported 2,473 suspected and confirmed cases of Ebola, including 1,350 deaths. All of the cases originated in Guinea, Liberia, Nigeria or Sierra Leone.

The epidemic caught Dr. Brantly completely by surprise. “As a medical missionary, I never imagined myself in this position. When my family and I moved to Liberia last October to begin a two-year term of working with Samaritan’s Purse, Ebola was not on the radar,” he noted.

“We moved to Liberia because God called us to serve the people of Liberia. In March, when we got word that Ebola was in Guinea and had spread to Liberia, we began preparing for the worst. We did not receive our first Ebola patient until June. But when she arrived, we were ready,” he said.

Dr. Brantly said he took “every precaution” to protect himself from the dreaded disease by following established safety guidelines. He did not provide a theory about how he contracted the virus.

On July 23rd, he woke up feeling “under the weather” and his life was turned upside down when he was diagnosed with the Ebola virus.

“As I lay in my bed in Liberia for the following nine days, getting sicker and weaker each day, I prayed that God would help me be faithful, even in my illness and I prayed that in my life or in my death that He would be glorified,” Dr. Brantly said.

Afterward, he learned there were thousands, perhaps millions of people praying for him around the world. “I can tell you that I serve a faithful God who answers prayers.”

“Through the care of the Samaritan’s Purse and SIM missionary team in Liberia, the use of an experimental drug, and the resources of the health care team at Emory University Hospital, God saved my life – a direct answer to thousands and thousands of prayers,” he said.

He thanked Samaritan’s Purse and SIM Liberia community, who cared for him and ministered to him with the love and mercy of Jesus Christ.

He also thanked the staff at Emory University Hospital, who he said treated him with expertise, as well as tenderness and compassion. “For the last three weeks, you have been my friends and my family and so many of you have ministered to me not only physically but also spiritually, which has been an important part of my recovery.”

“And thank you to my family, my friends, and my church family and all who lifted me up in prayer asking for my healing and recovery. Please do not stop praying for the people of Liberia and west Africa and for a quick end to this Ebola epidemic.”

He said he and his family would be going away for a period of time to reconnect, decompress and to continue to recover physically and emotionally. After he recovers more strength, he said he will share more of his story.

“Above all, I am forever thankful to God for sparing my life and I’m glad for any attention my sickness has attracted to the plight of West Africa in the midst of this epidemic. Please, continue to pray for Liberia and the people of West Africa and encourage those in positions of leadership and influence to do everything possible to bring this Ebola outbreak to an end. Thank you.”

Caption: Dr. Kent Brantly delivers remarks as he is released from hospital