Ecuador to Hand Over Assange to UK ‘In Coming Weeks or Days,’

“Information Clearing House” – Ecuador is ready to hand over the WikiLeaks founder to the UK in “coming weeks or even days,” RT editor-in-chief Margarita Simonyan said citing her own sources, as prospects of his eviction from the embassy are back in the media.

“My sources tell me [Julian] Assange will be handed over to Britain in the coming weeks or even days,” Simonyan wrote in a recent tweet which was reposted by WikiLeaks. “Like never before, I wish my sources were wrong,” she continued.

Simonyan’s message comes, as speculations Ecuador is in talks with the UK over the future of Assange are back again in British press. Earlier this week, the Times reported Britain is locked in top-tier discussions with the Ecuadorians in a bid to remove Assange from their London embassy.

Sir Alan Duncan, the Foreign Office minister, is said to be spearheading the diplomatic effort. Sources close to Assange said he himself was not aware of the talks but believed that America was putting “significant pressure” on Ecuador, including threatening to block a loan from the International Monetary Fund (IMF) if he continues to stay at the embassy.

The Times report comes just weeks before a visit to the UK by the newly-elected Ecuadorian president Lenin Moreno, who has labeled Assange a “hacker”, an “inherited problem” and a “stone in the shoe.” 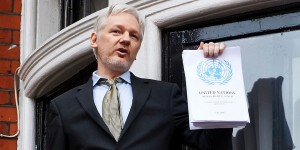 There have been other worrying signs indicating Assange is steadily becoming a troublemaker for Ecuador. In late March this year, the Ecuadorian government has suspended Assange’s communication privileges with the outside world, cutting off his Internet connection at the embassy.

The move was sparked by Assange’s alleged breach of an agreement to refrain from interfering in other states’ affairs. Previously, he blasted the Spanish government for cracking down on the Catalan independence movement.

Assange has been holed up in the Ecuadorian embassy since 2012 when he asked the Latin American state for asylum. The 47-year-old was wanted by Sweden on sexual assault allegations, but feared the extradition would lead to him being transferred to the US and prosecuted without a fair trial.

The US has been saying that Assange was “engaged in terrorism,” with Attorney General, Jeff Sessions, last year calling his arrest a “priority.” Over the years, WikiLeaks has published hundreds of thousands of classified US files, including the cables on the Iraq War, leaked by whistleblower Chelsea Manning in 2010.

Despite the Swedish investigation against him being closed in May last year, the Australian journalist was still unable to leave the embassy because of an outstanding British warrant for allegedly breaching bail conditions and no guarantees of him not being sent to the US.

Over the years, the whistleblower has been supported by activists and human rights groups, who demanded he be freed. A UN panel also found that Assange’s stay in the embassy amounted to “arbitrary detention,” but it wasn’t enough to change his fate.