(WNS)–Eight Nepali Christians arrested in June, including one pastor and two teachers, could soon be tried for trying to proselytize children.

The Christians were working in Dolahka District, in northern Nepal, a part of the nation hard hit by the 2015 earthquakes. Authorities arrested them June 8 for distributing religious literature to children in an attempt to convert, a violation of the anti-conversion statute in the 2015 constitution, according to Asia News. Officials tortured the Christians while they were in custody, according to Asia News’ sources.

Prakash Pradhan, principal of Mount Valley Academy, a local private school, denied the group tried to convert anyone. The group only handed out materials to Christian students who requested them, Pradhan said. 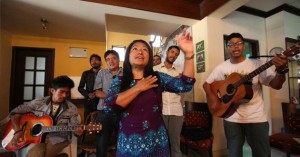 Pastor Tanka Subedi said the accusations are based on Article 26, paragraph three of the new constitution. Subedi is the leader of Nepal’s Religious Liberty Forum and co-chairman of the Nepal Christian Society.

“Based on the constitution, the government has decided to ban all projects that have the nature of proselytizing, which will paralyze most Christian activities in Nepal,” Subedi said by email.

Nepal adopted its new constitution on Sept. 20, 2015, outraging Hindu nationalists by remaining an officially secular nation. The nation used to be a Hindu monarchy. But Subedi said the new constitution’s impact “is just becoming visible,” and the Christian minority is living in confusion.

“The constitution in itself created a confusion on whether Nepal is a secular state or Hindu state called secular,” Subedi said.

“Last year, many were concerned when Nepal adopted its new constitution that included the controversial Article 26,” he said. “Christians feared that this article would be a weapon used to stop the growth of the Christian community. Today, Nepalese Christians have seen their fears realized …”

In 2015, religious rights groups, including Christian Solidarity Worldwide (CSW), condemned the constitution’s wording. CSW warned it “fails to allow for choosing and changing one’s faith … as a matter of individual rights, as required and guaranteed by international treaties.” Muslims, also a minority in Nepal, joined Christians in expressing concern over the new constitution’s conversion ban.

Although the accused Christians don’t have a trial date yet, courts are preparing charges, Asia News reported. Hindu nationalists want the government to impose the harshest sentence possible.

According to UCA News, the country’s new criminal code (which is not yet law) “proposes five years of imprisonment and a penalty of 50,000 rupees for anyone found guilty of converting a person from one religion to another.”

Subedi called the arrests unfair and insisted officials should not pursue charges. A democratic country which is a signatory of the International Covenant on Civil and Political Rights “should not be charging people for distributing books,” he concluded.

This is the second time this year Nepal’s government has angered Christians. In April, it removed Christmas from the calendar of official national holidays, Barnabas Fund reported. Although officials claimed they were trying to reduce the overall number of holidays, Christians perceived it as an attack on their religious rights.