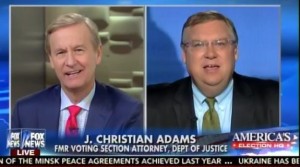 Adams, who was the Voting Section Attorney at the US Department of Justice, filed six suits in the past year against Philadelphia and Broward County, Florida where the voter rolls are corrupted. Adams said he had one case in Texas where the person died in 1944.

Far left groups continually sue to keep the voter rolls the way they are. The Obama administration has no desire to clean up these voter rolls.