Elizabeth Warren Struggles To Answer Question About Her Wealth

By Jonathan Pincus
Earlier this week, a Boston radio host confronted Sen. Elizabeth Warren over her supposed hypocritical attacks against the “1 percent.”

The Massachusetts Democrat has made headlines for consistently showing disdain toward wealthy Americans. She has gone on record calling President Donald Trump a “money grubber,” and criticized former President Barack Obama for accepting $400,000 for a single speech.

Warren’s net worth reportedly hovers between $3.7 million and $10 million, and she also reportedly received over $700,000 for only two years of teaching at Harvard University as a law professor.

With this public knowledge in hand, when WRKO radio host Jeff Kuhner saw the wealthy Massachusetts senator in the radio station’s hallway, he decided to take advantage of the rare opportunity to confront Warren about her statements.

“Question: You often say, and I agree with you, that the 99 percent are getting shafted by the 1 percent,” Kuhner said to Warren. “You live in Cambridge, you’ve got a $2 million mansion. Plus you’re a multimillionaire yourself.” 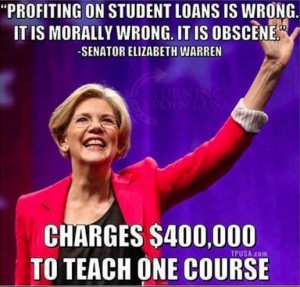 She appeared to have no qualms with Kuhner’s statement, even nodding in agreement with him, so Kuhner continued further into the interrogation. “How can you rail against the 1 percent, when in a sense, you are and live like the 1 percent?” he asked.

Warren proceeded to enter into a defense outlining why she can criticize the tax bracket she is a part of. Warren gave Kuhner some information about her family background, none of which answered the question she’d been asked.

“And you live in a mansion in Cambridge, do you not?” Kuhner then asked. Warren dodged the question once again, instead opting to outline further the struggles she faced as a broke college student.

“I ended up graduating from a commuter college that cost $50 a semester, and I became a special needs teacher,” Warren said. “And when I had a baby and started going to school part time at a state law school that cost $450 a semester, that’s how I had opportunity, and I am deeply grateful to an America that made those opportunities possible.”

Warren’s second attempt at dancing around the clearly stated question did not appear to go over well with Kuhner. “I know, but you are a part of the 1 percent,” he replied. This prompted Warren to add that the opportunities she experienced growing up “are not available in America today.”

“But you are a multimillionaire, and you have a mansion in Cambridge, do you not?” Kuhner added. “It’s worth north of $2 million.” “I had opportunities because America invested in kids like me, and that’s the reason I’m in public office,” Warren replied.

An acquaintance of Warren then jumped in to rush Warren away from the conversation. That’s when Kuhner made sure to get in the last word. “You mean the $350,000 for one course, is that the opportunity senator?” Kuhner was most likely referencing a 2012 statement made by then-Sen. Scott Brown, in which he claimed Harvard University paid Warren $350,000 to teach a single course.

Warren has never publicly refuted these claims. She was once again given the opportunity during the exchange with Kuhner, but did not respond.