The revelation is contained in 296 pages of State Department records Judicial Watch obtained through a Freedom of Information Act (FOIA) lawsuit filed in May. According to the watchdog group, 44 of the email exchanges had not been previously released, bringing to 171 the number of known emails former Secretary of State Hillary Clinton did not turn over to the State Department.

In an April 2009 email exchange, Doug Band, who oversaw all Clinton Foundation employees, asked top aides to then-Secretary Clinton to connect Gilbert Chagoury to the “substance person” in Lebanon. 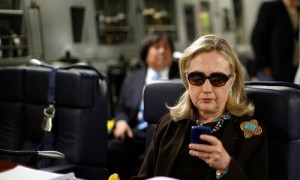 “As you know, he’s key guy there and to us and is loved in lebanon [sic],” Band wrote to Cheryl Mills, then Clinton’s chief of staff, and Huma Abedin, her deputy chief of staff.

In her response to Band, Abedin recommended Jeff Feltman, the former U.S. Ambassador to Lebanon (2004-2008), who would become assistant secretary of state for near eastern affairs in August 2009.

“Better if you call him … now is preferable,” wrote Band, who began working in the Clinton White House in 1995. “This is very important.”

The exchange is the first known reference to Chagoury during Clinton’s tenure as secretary of state. Why was he “key” in Band’s eyes? Chagoury donated between $1 million and $5 million to the Clinton Foundation, according to foundation records, and in 2009 he pledged $1 billion to the Clinton Global Initiative—Band’s brainchild.

Although the exchange occurred with Clinton’s top aides, it appears to violate the spirit of an ethics agreement she made only months before. In a January 2009 letter to James H. Thessin, the State Department’s designated agency ethics official, she professed a commitment to “the highest ethical standards of conduct for government officials.”

“For the duration of my appointment as secretary, if I am confirmed, I will not participate personally and substantially in any particular matter involving specific parties in which The William J. Clinton Foundation (or the Clinton Global Initiative) is a party or represents a party,” Clinton wrote.

While critics have pointed to other instances of political favors Clinton’s State Department delivered, the case of Chagoury, a Lebanese-Nigerian with a history of corruption allegations, is potentially the most consequential. WORLD recently published an investigative series detailing the troubling ties between Clinton and wealthy Nigerians, including Chagoury, who potentially benefited from Clinton’s decision not to designate Boko Haram a foreign terrorist organization (FTO).

As Boko Haram proliferated into the world’s most deadly terrorist organization, Chagoury sought investors for a $6 billion reclamation project called Eko Atlantic—efforts that could have been hampered by the financial sanctions that accompany FTO designations. Secretary of State John Kerry eventually issued the FTO designation in November 2013, at least two years after the intelligence and defense communities wanted it.

To date, Boko Haram attacks have killed tens of thousands in the Lake Chad region and displaced more than 2 million residents across Nigeria, Cameroon, Niger, and Chad.