(WNS)–Clementa Pinckney, senior pastor of Emanuel A.M.E. Church in Charleston, S.C., was remembered today by colleagues and friends as a godly man who cared deeply for others. Pinckney was murdered along with eight of his parishioners Wednesday night as he led a prayer service.

“What stood out more than his big frame and booming voice was his astronomical heart he had for his fellow man,” said state Senate Minority Leader Nikki Setzler.

Pinckney’s empty desk in the Senate chamber was draped in black and covered in flowers Thursday morning as fellow lawmakers mourned his loss.

“He had a core not many of us have,” said Sen. Vincent Sheheen, who sat beside him. “I think of the irony that the most gentle of the 46 of us—the best of the 46 of us in this chamber—is the one who lost his life.”

To Pinckney, politics and faith were inseparable. He said in a 1998 interview his job as a legislator was to sift through the different interest groups and “[figure] out what interest we do not hear from. We need to represent those who are not organized—poor people, mothers with children …” 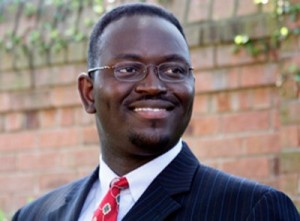 Pinckney learned to meld faith and public service at the knees of his forefathers. His great-grandfather, the Rev. Lorenzo Stevenson, sued South Carolina’s Democratic Party to end whites-only primaries. His uncle, the Rev. Levern Stevenson, worked with the NAACP in the 1960s and 1970s to desegregate Jasper County school buses.

Since the April shooting death of Walter Scott, an unarmed black man who was running away from a police officer, Pinckney had raised awareness about gun violence. On Wednesday, he spent the earlier part of the day campaigning in the city with Democratic presidential hopeful Hillary Clinton.

President Barack Obama said Pinckney’s church, known as “Mother Emanuel,” had a “sacred place in the history of America.”

“The Christian faith of Rev. Pinckney and his congregation impelled them to reach out not just to their members but to all in need,” said Obama, who knew Pinckney personally.

In 1995, Pinckney graduated from Allen University with a Bachelor’s degree in Business Administration. In 1999, he earned a Master’s of Public Administration from the University of South Carolina. That same year, he was featured in the November issue of Ebony magazine as one of “30 Leaders of the Future.” In 2008, he graduated from Lutheran Theological Southern Seminary with a Masters of Divinity.

Pinckney took his first pastoral position at age 18. He led Emanuel A.M.E. since 2010. Pinckney was born on July 30, 1973, in Beaufort, S.C., about an hour and a half southwest of the church, the oldest black congregation south of Baltimore. He is survived by his wife, Jennifer, whom he married in 1999, and their two children, Eliana and Malana.