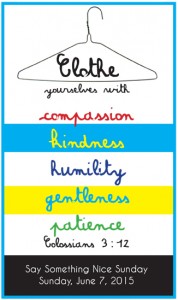 CHARLESTON, S.C. – As the Ninth Annual Say Something Nice Sunday approaches on June 7, it is a great opportunity to reflect on our progress. Carol, my wife, was teaching in an inner-city middle school in 2005 and I volunteered to help some of the students with their creative writing skills. I was overwhelmed by the pervasive nature of negativity. Someone had to do something. I wrote a little booklet, Say Something Nice; Be a Lifter. My goal was to get the booklet used in both public and private schools, but that didn’t happen. The City of North Charleston was interested. The city bought copies for all of its employees. The city of Charleston bought copies for all of its neighborhood presidents. Mayor Keith Summey of North Charleston declared the first Say Something Nice Day on June 01, 2006. It is now listed in the Chase Calendar of Events.

The rhetoric in the Christian community was going from bad to worse. I talked to our pastor, the Rev. Marshall Blalock, about having a Say Something Nice Sunday for churches. He became an enthusiastic supporter. The congregation passed a resolution calling for the first Sunday in June of each year to be observed as Say Something Nice Sunday. The Rev. Edgar Boles, Executive Director of the Charleston Baptist Association became a supporter as did Dr. Carlyle Driggers, retiring Executive Director-Treasurer of the South Carolina Baptist Convention. Donna Lea Fanning, FBC’s messenger, presented the idea to the Association and it was unanimously adopted. Rev. Boles submitted the resolution to the South Carolina Baptist Convention and it was adopted in 2007 in a resolution titled, “Unity in the Body.” Our plan was to make this an international movement. The first Sunday in June was chosen because June is already Better Communication Month. We formed an ecumenical steering committee.

As we prepare for the Ninth Annual Say Something Nice Sunday, we are encouraged by the response. Bishop Guglielmone of the Catholic Diocese of Charleston endorsed our movement and then we secured the support of Cardinal Dolan of New York.

In 2009 I edited and contributed to a group of essays by leaders from various denominations, Christian Civility in an Uncivil World was published by Smyth&Helwys Publishers. At the invitation of Ernest and Pat Brown directors of The Baptist House at the Chautauqua Institution in Western New York State, I have conducted a series of Brown Bag Lunches on Christian civility. In 2012 we received support in the United Kingdom. In 2014 the Baptist World Alliance agreed to help promote the event and Chaplain Norris Burke wrote one of his syndicated columns on the movement. Already in 2015 there has been a terrific post on the Day1 web site, the voice of mainline protestant churches. The Christian Meetings Association and the Random Acts of Kindness Foundation are adding the date to their web calendars. Bishop Sauls, COO of the National Episcopal Church, wrote his weekly blog on its importance. Through the years excellent sermons on the topic have been preached across the denominational spectrum and can be found on the internet. Rev. Andrew Shull, First Baptist Church of Woodruff, SC, dedicated an entire week to the topic.

Please join in. If we can honor God with our speech on one day, perhaps we can do it for two, three, or even more. There is nothing to buy. The materials can be found at www.fbcharleston.org. Click on Messages/Resources at the top of the page. Scroll down on the right to Say Something Nice Sunday. You will find art work, bulletin inserts and Scripture passages and devotionals. Churches and/or individuals are encouraged to submit additional materials.