Enemies Within the Church 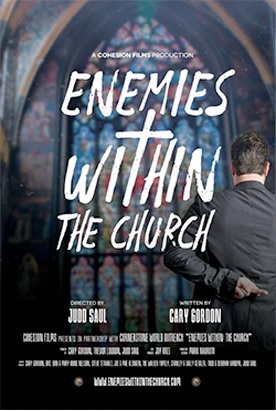 Enemies Within: The Church is an educational, historical, and evidence-based movie experience that provokes a passionate return to orthodox Christian faithfulness across the western world. As is necessary for such a wonderful turn toward Christ, the movie heralds a clarion call for Christians to turn away from popular, yet errant beliefs held in contradiction to carefully interpreted Holy Scriptures.

Enemies Within: The Church is much more than a mere movie. It is also an invitation for believers of every denominational stripe to employ a proven Biblical recipe capable of producing restored strength and blessing for all who answer. Specifically, the movie encourages the Church to cleanse itself from contamination imposed by cultural Marxism and a heretical teaching known as “The Social Justice Gospel.” By hearing the exchanges between the movie’s host and experts interviewed around the world, viewers are provided with a bright light shining upon truths formerly hidden behind the shadows of shallow pop-culture.

In the end, the audience is pointed toward a hope-filled and practical action plan that produces solutions found only in and through the royal Law of Christ. The movie elucidates the fact that every single problem faced by western civilization is, ultimately, a theological problem, and every solution to every problem is a theological absolute. It answers the question: “What happened to living, powerful, transformative, nation-shaking Christianity?” The documentary reminds its audience that during the twentieth century, the twin evils of communism and fascism were responsible for the slaughter of nearly 200 million people. Both forces attempted (and were often successful) to co-opt Christianity to serve their goals.

Filmmakers Judd Saul, Trevor Loudon, and movie host, Pastor Cary Gordon, of Cornerstone World Outreach in Sioux City, Iowa, show that the Marxists are still actively and successfully pursuing this goal in a church near you at this very moment. In Matthew 10:16, Jesus warns: “Behold, I am sending you out as sheep amid wolves, so be wise as serpents and innocent as doves.” In John 8:44, Jesus refers to the devil as the “Father of Lies.” Leaning upon empirical, unassailable evidences, this documentary film reveals the subversive ideas, persons, and organizations who are clearly shown as active participants in efforts to undermine the Christian Church and systematically destroy its foundations from within.

The production team of Enemies Within: The Church is faithfully committed to working within the Biblical parameters of such important duties, as commanded by the Lord Jesus Christ in Matthew 18:15-20, and echoed by the Apostle Paul in 1 Corinthians chapter 5, and in Ephesians 5:1- 15. They are an eclectic group of independent experts, from various backgrounds and church denominations, who have united in this great cause to promote a return to the fundamentals of Christianity.

Enemies Within: The Church has informants from the inside of organizations who have provided concrete proof of left-wing front groups providing money in exchange for the promotion of cultural Marxism, which deliberately lures evangelicals toward the acceptance of varying degrees of political and theological liberalism and its unavoidable consequences. To be clear, our evidence shows that each of these organizations have already begun implementing one or more of the following Marxist programs: Social Justice, Critical Race Theory, and Same-Sex Attracted Christianity.

How did this happen? How did we get here? The answer to those pertinent questions is found in history. There are three big ideas that the Church embraced within the first 100 years after the Reformation. Ideas have consequences, and we will explain how those ideas have brought us to the present tipping point we now face together as Christians in the west. One of the consequences of those ideas embraced by the Church long ago is the symptom of a false gospel that bears the name Social Justice. Producer Trevor Loudon has scrutinized key members of the Gospel Coalition and other “Christian” organizations, who promote the Social Justice Gospel, within his database of confirmed left-wing activists, and we have discovered much troubling evidence of leftist infiltration. Not only are some of these persons currently promoting cultural Marxism under the guise of conservative Christianity, some have been left-wing activists their entire lives. If action is not taken immediately, there will not be a credible Christian conservative movement left in America. If America falls, there is no other place on Earth where people can run to find freedom.

Enemies Within: The Church caringly calls upon leaders to repent who have publicly fallen into error and subsequently misled God’s people into deception. The movie also calls for a cleansing of the Church from the contamination imposed by cultural Marxism and the heretical false gospel of Social Justice, pointing the audience toward a hope-filled and victorious action plan.

For additional information or to watch the movie please visit enemieswithinthechurch.com