In a tit-for-tat war of words, Turkish President Recep Tayyip Erdogan said he won’t turn the other cheek and promised to keep calling European leaders “Nazis” as long as they keep calling him a “dictator.”

“How does that work, you have the right to call Erdogan a ‘dictator’ but Erdogan doesn’t have the right to call you ‘fascist’ and ‘Nazi?’” he said in an interview with CNN-Turk and Kanal D television channels. They accuse me then they speak of Erdogan as a ‘dictator,’” he said, referring to himself in the third person, as cited by AFP. “So I’ll continue to address them in these terms,” he said.

Earlier this month, the outspoken Turkish leader branded Dutch officials as “Nazi remnants,” after the government withdrew permission for Turkey’s foreign minister to speak at a pro-Erdogan rally in Rotterdam. 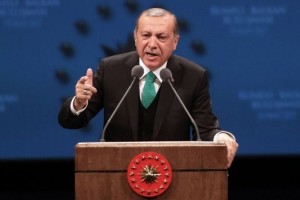 He has also slammed a number of local officials for cancelling similar political rallies for Turkish ex-pats in German cities that had been scheduled in March. The speakers were going to promote the upcoming mid-April referendum on constitutional changes that could see Erdogan’s presidential powers expanded.

At a rally in Istanbul on Sunday, Erdogan once again labelled some European leaders “Nazis,” saying they “would revive gas chambers” if they weren’t so ashamed. To add fuel to the fire, Erdogan turned his sights to German Chancellor Angela Merkel.

“When we call them Nazis, they get uncomfortable. They rally together in solidarity. Especially Merkel,” he said.

“Merkel… She backs [the Netherlands], too. You too are practicing Nazi practices. On whom? On my Turkish brothers and sisters in Germany,” the Turkish leader added.

Eyebrows were raised when Erdogan warned on Wednesday that people in Europe would not be able to “walk safely” on the streets if they did not change their current attitudes. “If Europe continues this way, no European in any part of the world can walk safely on the streets. We, as Turkey, call on Europe to respect human rights and democracy,” Erdogan said in Ankara, Reuters reported.

His remarks came under fire from Germany’s new president, Frank-Walter Steinmeier, who said Erdogan risks wrecking everything Ankara has recently achieved. “The way we look [at Turkey] is characterized by worry that everything that has been built up over years and decades is collapsing,” Steinmeier said during his inaugural speech on Wednesday.

“President Erdogan, you are jeopardizing everything that you, with others, have built,” he noted, urging the Turkish leader to immediately “end the unspeakable Nazi comparisons!”

Erdogan said he “deplored” Steinmeier’s comments. “German President Steinmeier made a statement targeting me although we are good friends. I deplore him for his statement. I wish he had never made such a statement,” he said, Turkey’s Hurriyet news reported.

Stating that he has no plans to visit Germany before the referendum, Erdogan noted that his “Nazi” remarks for the Netherlands and Germany were appropriate. “If I criticize Germany, I say this within its definition. If I say this by using the Nazi comparison, I say within its definition. I also say the same thing for the Netherlands. You will not allow my minister into the [Rotterdam] consulate and you will make your dogs bite my citizens… Where is international law? Then you are disturbed when we say Nazism,” he said.

Erdogan’s Nazi references sparked outrage in Germany, where the country’s notorious Nazi past and the crimes of Hitler’s regime are still sensitive issues. “The comparisons between today’s Federal Republic of Germany and National Socialism, which we have heard in recent days, are not only insulting and absolutely false – they also relativize the Nazis’ rule of terror,” Josef Schuster, the head of the Central Council of Jews in Germany, said, as cited by Deutsche Welle.

“Has Mr Erdogan lost his mind?” Julia Kloeckner, the vice-president of Merkel’s CDU party, wondered, telling journalists that she would urge the EU to halt the transfer of “financial aid worth billions of euros” to Turkey, Die Zeit reported.

Earlier, Merkel also urged Ankara to stop using Nazi references, saying that Germany “will not allow the victims of the Nazis to be trivialized.”