Judges order Moscow to pay damages to U.S. families unable to bring home the children they planned to adopt

(WNS)–Europe’s top human rights court on Jan. 17 condemned a 2013 Russian law banning all adoptions by Americans and ordered the government to pay damages. While Moscow denounced the ruling, officials appear ready to reconsider the policy.

The seven-judge panel, including one Russian, unanimously found the law discriminatory and a violation of the European Convention on Human Rights. Many of the applicant families had already traveled to Russia, met the children, and formed bonds with them. The court ordered Russia to pay each couple 3,000 euros ($3,190) in damages and $600 in legal fees.

But on Jan. 18, a Russian legislator said Moscow was willing to open discussions about ending the ban on American adoptions. 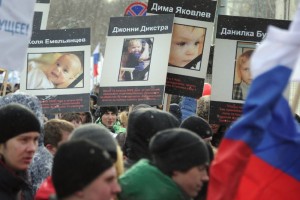 “We are ready for dialogue,” said upper house speaker Valentina Matvienko, noting the United States would have to ensure the welfare of Russian adoptees. She maintained the human rights court ruling was unfounded and not international law.

Russian President Vladimir Putin signed the ban into law in December 2012 after lawmakers pushed it through parliament. Many advocates called the move political retaliation for U.S. sanctions on Russians accused of human rights violations. The Russian government maintained that reported abuse of Russian adoptees by U.S. families triggered the ban.

More than 200 U.S. families were finalizing adoptions when the ban became law on Jan. 1, 2013. Experts estimate more than 1,000 families were at some point in the adoption process.

“The alternate for most of those children was a life in an institution, and aging out,” said Becky Weichhand, executive director of the Congressional Coalition on Adoption Institute. Children who “age out” of an institution experience high levels of suicide, trafficking, and other tragedies, she noted. Weichhand called the 2013 law a “response that put politics above the human capital of a child’s life and need for a family.”

Although the court’s ruling is a “step forward in the conversation,” it can’t make up for the loss experienced by the children waiting for new homes, Weichhand said.

Daniel Nehrbass, president of Nightlight Christian Adoptions, found the court’s ruling of discrimination encouraging but would rather have seen the judges focus on the children. The court declared complaints filed on behalf of the children inadmissible, and ruled only on the parents’ complaints.

Nightlight facilitated more than 1,000 Russian adoptions before 2013 and had about 100 families in the process of adopting when the law took effect. Fifteen families were in the final stages of the process. Nehrbass estimates Nightlight would have done another 150 adoptions since 2013, providing permanent homes for 150 Russian children.

As to the possibility of doors opening between the United States and Russia moving forward, Nehrbass said he hopes Moscow will reverse the ban and the situation will improve: “How could it get worse?”