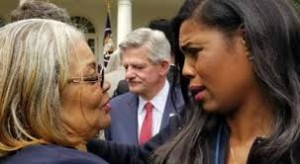 NORFOLK, Va. – As part of an ongoing campaign to persuade black voters to stop voting for Democrats, E.W. Jackson, President of STAND – Staying True to America’s National Destiny – has released a hard-hitting video against Planned Parenthood.

There is wide racial disparity between the percentage of black abortions (37%+) versus the number of black people as a percentage of the American population (13%).

The Bishop argues, “This is in keeping with Margaret Sanger’s racist vision for America. She wanted to limit if not eliminate minorities, the poor and what she called ‘the feeble-minded.’ She inspired an abortion industry which has executed Sanger’s vision with extraordinary effectiveness, killing approximately 15-20 million black babies before they could be born.”

Jackson says it is no coincidence that many Planned Parenthood facilities are in or near the black community. “In every other case of racially disparate treatment and outcomes, the civil rights community demands strict scrutiny. For example, why are black men disproportionately represented in prison? Why are black children over represented in special education? Why are they far more frequently suspended from school? Or prescribed Ritalin?

“In every such case, even if there is no evidence of an intent to discriminate, the mere fact of disparate impact on black Americans means investigations and usually corrective action. In the case of abortion however, because it is a liberal cause celeb, there is no effort to determine why so many black babies are aborted compared to every other racial or ethnic group.”

Jackson claims abortion and Planned Parenthood are extensions of the Democrat Party and urges black voters to abandon both because “they are literally destroying black lives.”

View the first episode of Truth in Black and White here: https://www.youtube.com/watch?v=fT_tJ_BEqSk