Everything You Were Taught About American Slavery Is Wrong—Ask a Southerner! 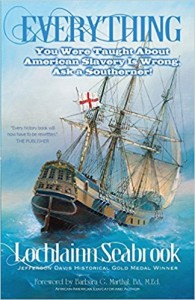 This 1,020-page work by famed Southern historian Loch­lainn Seabrook decimates the deceitful view of slavery churned out by Yankee mythologists. Lavishly illustrated with over 500 intriguing images, a helpful “world slavery time line” and a detailed index of significant historical figures, Seabrook lays out the whole truth.

Did you know that there were thousands of African-American and American Indian slave owners in early America. That less than 5% of white Southerners owned slaves? That the Emancipation Proclamation did not free a single slave—and was not meant to? That until the last day of his life Lincoln campaigned to have all Blacks deported to Africa? That Jefferson Davis abolished the foreign slave trade before Lincoln? That Davis adopted a black child during the war?

The foreword is written by black Amer­ican educator Barbara G. Marthal, B.A., M.Ed. Copies are available at all good bookstores or online at Amazon.com or at americanfreepress.net.