(Infowars.com) – Facebook has announced it will empower Snopes, an organization with a clear left-wing bias, to bury so-called “fake news” on its news feed, a move that clearly opens the door for the outright censorship of conservative content and opinion.

“To combat fake news, Facebook has partnered with a shortlist of media organizations, including Snopes and ABC News, that are part of an international fact-checking network lead by Poynter, a nonprofit school for journalism located in St. Petersburg, Florida,” reports Business Insider. 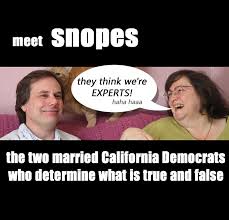 This network will identify stories it deems to be “fake news” and then flag the URL, ensuring the story is buried in users’ news feeds and seen by significantly less people. One of the organizations on the list tasked with burying “fake news” is Snopes, which represents a clear conflict of interest given that Snopes is clearly not impartial.

As the Daily Caller reported, Kim Lacapria, Snopes’ main political “fact checker,” describes herself as “openly left-leaning” and a liberal. She has previously equated Tea Party conservatives with jihadists.

Lacapria “regularly plays defense for her fellow liberals,” according to Peter Hasson, and has betrayed her partisan bias on numerous occasions by defending Hillary Clinton and claiming that Orlando nightclub terrorist Omar Mateen wasn’t a Democrat when he was actually a registered Democrat.

Lacapria even denied that Facebook’s burying of trending news topics was an issue after Facebook employees admitted it was happening and Facebook subsequently vowed to change the policy. Does this sound like someone who is impartial? Or does it sound like someone who, given the power to do so, will exercise bias by burying conservative opinion as “fake news” even when such content is perfectly legitimate?

Snopes itself is run by a left-wing couple based out of California. These are the people who will be deciding what’s “fake news” and what isn’t. 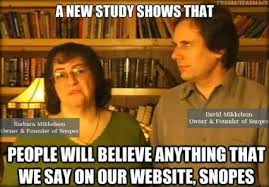 The list also includes the Washington Post Fact Checker, an inclusion that will also raise concerns given that only last week the Post had to admit that it couldn’t “vouch for the validity” of a Russian propaganda blacklist that a story published by the newspaper was entirely based on. The Post was subsequently savaged by Glenn Greenwald for promoting a “McCarthyite blacklist”.

Another name on the list of organizations that will police “fake news” for Facebook is ABC News, an outlet that ignored the bombshell news that the FBI was conducting an active investigation into the Clinton Foundation for more than a year. 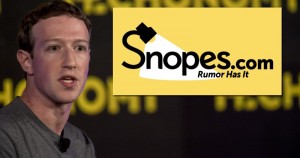 Given that the mainstream media is distrusted by around two thirds of Americans, an image blackened further by Wikileaks revelations about innumerable journalists being in bed with the Clinton campaign, how can an institution with such low levels of trust be handed the power to flag and bury so-called “fake news” without abusing it?