MOUNT HERMON, CA (ANS) – What was/is the Vietnam War for you?  For many, it’s a history book chapter.  For me it was a controversial conflict that divided our nation and set university campuses aflame.  For my classmates, it was variously a cause for debate, protest, a call to serve, or motivation to relocate to Canada.

To my current barber – a former mayor in South Vietnam – it meant fleeing home and establishing a new life. For many, it meant tragic injury, death, bereavement, perhaps decades of stress, broken relationships, shattered dreams.  Over 58,000 Americans died there.

As this nation commemorates the war’s 50th anniversary, a touching new film traces its impact on two families.  Faith of our Fathers tells a moving (fictional) story of two men who, in 1997, embark on a journey to the Vietnam Veterans Memorial in Washington, DC, to discover the fathers they never knew.  Guided by wartime letters from their dads – combat companions who died in Vietnam – John Paul George and Wayne Adams meet their fathers and themselves. 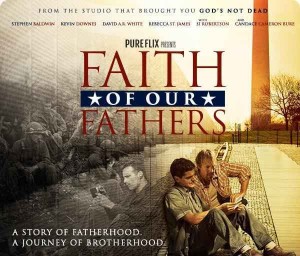 We see humor and angst as the men squabble, adjust, and learn of their fathers’ love for them.  Like the sons, the fathers began divided on faith – John Paul’s dad devout, Wayne’s cynical.  Friendship and combat’s grim realities focused both on things eternal.

Please forgive me, but I’m one of the few in the civilized world who just don’t get Duck Dynasty.  I will concede this: in this movie, the man can push beef jerky. And as both a person of faith and a Vietnam vet, Robertson contributes a personal touch to the film’s cause:

“So many young men…left families behind who never got to know those great guys.  This story is about…Vietnam, but it happens in all wars, and I’m proud to be part of a film that helps bring peace to people.”

Bringing peace to troubled hearts is a film objective.  Producers dedicated the film “to military service men and women and their families who have made the ultimate sacrifice.”  They cite Jesus: “Greater love has no one than this, that he lay down his life for his friends.”

As illustrative examples, Downes tells of a veteran and a surviving family member whom the film helped to process war-related memories.

A history refresher for folks like me who might be puzzled that the war’s 50th anniversary would be happening in 2015, since US participation preceded 1965:  A 2012 presidential proclamation declared a 13-year commemoration of the 50th anniversary.

US Vietnam military involvement evolved in the 1950s and 1960s from advice and support to direct combat.  A 2012 US Department of Defense Information Paper argues it’s impossible to fix a precise US start date, but that a July 28, 1965, LBJ press conference (“We will not surrender and we will not retreat”) “is probably the strongest contender…” if one had to choose.

The war ended in April 1975 when America pulled out, Saigon fell, and South Vietnam surrendered to the North.  Alas, it still hasn’t ended for many survivors and families.  Maybe Faith of our Fathers can help move more of them toward closure.

Rated PG-13 (USA) “for brief war violence” www.FaithOfOurFathersMovie.com Opened July 1 in Theaters and will soon be available on DVD.