(NaturalHealth365) What if I told you that the practice of conventional dentistry can trigger autoimmune disease? Would you believe me? In reality, that’s exactly what happened to one woman diagnosed with Lupus and MS – due to a very common dental procedure.

Last year I settled a 14-year-old lawsuit after having been mercury poisoned during the drilling out and replacement of a silver amalgam dental filling.

In March of 1998, seven days after a “silver” filling was removed and replaced with a new one, I suddenly became dizzy during the intermission of a ballet performance, and within a short walk to my car I realized something was very wrong. 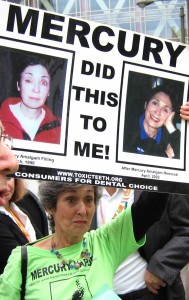 Every image was double and the lights of oncoming cars were blinding me. I was frightened, and couldn’t imagine what had happened to my near perfect eyesight. As I closed one eye, I discovered that I had one image, and slowly drove home.

This was the beginning of a traumatic journey which changed my life. What I thought were symptoms that would dissipate within days, only worsened, and nine days later my optometrist insisted that I immediately be examined by a neuro-ophthalmologist, a specialist in eye conditions. The diagnoses of lupus and multiple sclerosis were devastating, as I had lost friends to these two diseases, and I thought this could be the end of my life.

The initial double vision was followed by a rash of disabling autoimmune and muscle weakening symptoms, including loss of equilibrium and head pain. I recall thinking “I’m going to find out what did this to me, because you don’t get MS in a day’” After buying an eye patch, I went on the Internet.

At 3:20 a.m., on my fifth day of research, I was flabbergasted to find a posting by a British woman who had two mercury fillings drilled out. A week later, the woman wrote, she developed double vision. That was my first clue that the onset of acute double vision had most probably been caused by dangerous exposure to mercury in the dental chair 7 days before.

Continuing my research, I connected with groups of injured patients, dentists and scientists campaigning to end the use of mercury in dentistry. The more I learned, the more convinced I grew that I had been severely mercury poisoned.

One morning I awakened and could barely open my eyelids. Another neurologist who I sought for a second opinion diagnosed me with ocular myasthenia gravis, a rare autoimmune disease that can weaken the muscles in a person’s eyes and throat. When considering clinical exams and resulting bloodwork, three eminent Philadelphia neurologists alarmingly assured me that there was ‘no known cause’ nor cure for these diseases, and that I would be “sick for the rest of my life”.

Determined to regain my life, within weeks I was sitting in the dental chair of Dr. Blanche D. Grube, a pioneer mercury-free dentist, who safely removed three mercury fillings on the first visit. During the next six months, Dr. Grube removed the balance of the remaining mercury fillings that had been implanted in my teeth starting at the age of eight.

At the same time, I was being treated by an alternative physician, who had definitely diagnosed me with mercury poisoning.

Gradually, over a period of 3 ½ years my eyelid problems diminished and tests showed the markers for MS and myasthenia disappeared. Also disappearing were bouts of depression that I had fought for a decade, at times suicidal.

As I healed, I became an ardent consumer activist crusading for a ban on mercury in dentistry, protesting at the 2005 American Dental Association convention in Philadelphia and testifying about the dangers of mercury fillings at FDA and State Department hearings.

I proposed and lobbied Philadelphia City Council to approve an ordinance requiring the city’s dentists to give patients copies of a brochure warning of the hazards of mercury fillings. In 2009, it became law.

I support the significant contributions of the International Academy of Oral Medicine and Toxicology (IAOMT) and other organizations and consumers whose efforts have proven the scientific hazards of mercury filings as well as the negligence of the Food and Drug Administration and Health and Human Services.

“I am a warrior,” and will continue to be so until mercury is banned in dentistry.