When a crisis strikes, many of us rely on relatives or friends for support, but what do you do if you have no one to help?

Michelle relocated to Rhode Island after being thrown out of a second-story window by her husband who had repeatedly beat her during their thirteen years of marriage. Her five children witnessed this abuse. Fearing for her safety, Michelle, and her children moved in with her sister who lives in Cranston, RI.

The effects of the abuse followed Michelle and her children. Later Michelle found out that her leg would have to be amputated from the knee down due to a severe infection that had set in from being thrown out of the window. Her sister could no longer take care of the Kids. Michelle felt alone and trapped.

Donna Pihl, Lead Family Coach and Coordinator for SFFC’s RI chapter, shares the details: “We were only able to host the two pre-school boys because we were unable to find a host family to take the three school aged children who needed to be in the Cranston area. Michelle went into the hospital at the end of September and was transferred to a rehab facility a week and a half after surgery.  She was able to see her children once a week when we (and the foster parents) could bring them for a visit.”

“During this time, Michelle had a falling out with her sister and was told she could not  come back to the apartment. Michelle continued to call 211 to get into a shelter and applied to housing all over RI–both for disabled individuals and for families. She went for interviews at two family shelters at which time she was told that she could bring 2-3 of her children, but was not able to bring all five! Nine weeks after her surgery she was still sitting in rehab waiting to be reunited with her children. She advocated well for herself, but she also had two social workers advocating for her by calling different shelters and housing authorities. She was finally accepted into Crossroads Family Shelter December 9th, which is not ideal, but at least, they are all together. She is waiting to get into more permanent housing.”

In another instance God used SFFC to save the life of an unborn child. Donna joyfully explains, “I met this young pregnant woman at a crisis pregnancy center back in early May. She told me that she found out that she was pregnant on New Year’s Eve and that her mother told her that if she didn’t get an abortion, she would need to leave. She did not want to get an abortion, but she had nowhere to go!”

“Her pregnancy counselor called me, and I met with her. She told me her story. She wasn’t sure she wanted to stay with the baby’s dad as he had not been supportive of her carrying the baby to term. She also informed me that she was on methadone and had been for two years (after an addiction to pain pills), but that she had started to wean off to be completely methadone free when the baby was born. After all, these were her selfish choices that got her to this place and not her baby’s fault. The clinic advised against weaning off as it posed a danger to her baby. She decided to go forward with the taper.”

“She also had a job, but no car so had to be near public transportation. She told me that she had an appointment to get an abortion the next day. I asked her to promise me that she wouldn’t go to that appointment and to give me three days to find her a place. I knew that God would not bring this young woman to me only to have to turn her away. I began calling my host families and when I mentioned the methadone all of the families politely declined until I called a host family that had recently come on board to host children! I explained the situation; they decided to meet her, and she moved in mid-May. It was a perfect match (God ordained), and she loved her new family and they loved her.” 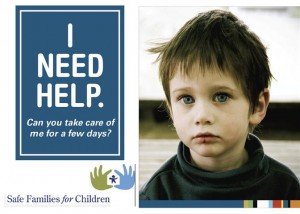 “The host mom was at Alivia’s birth! Through the time spent away from her family, she was able to reconcile with her mom and the rest of her family. She moved back near her family, and they are wrapping support around her and the baby. She spoke at our 30th celebration for Bethany Christian Services and got a standing ovation! What a testimony. My husband turned to me after her story and said, “if that doesn’t make it (all the late nights and weekend calls) all worthwhile–you saved that baby’s life”!”

There are many success stories coming out of SFFC, however, there are still many families, like Michelle’s & Alivia’s, who need assistance. I asked Donna to elaborate on the needs of SFFC.

“At, this time, we are always looking for more host families for children and pregnant, homeless women. We get calls frequently regarding young moms and babies or children that need a temporary place to stay, but we only have one or two host families open to taking moms and children. We have recently partnered with Blackstone Valley Community Action Program to work with runaway youth and will be recruiting host families to take in 15-17

“Ideally, it would be great to get churches on board so that we could have teams working together to do what the church was meant to do–wrap support around families in the community that are in crisis.”

For centuries, the church was the place people turned to for help. The emphasis in the early church was on hospitality, which in the Greek means, the love of a stranger. In recent years the church has stepped back, and other social agencies have taken its place. SFFC Is looking for churches who can step up and make a difference.  They provide the education, structure, and process for churches to help families in crisis.

Here are a few ways your church can help:

Host Families: Practice Biblical hospitality by making room in their homes for a child or pregnant woman needing a temporary, safe, and loving place to live.

Family Coaches:  Facilitate communication and relationship building between the host family and the family requesting support.

Ministry Team Leaders: Recruit and support the SFFC team of volunteers at the church, along with coaching from SFFC staff.

Rachel Hively, an SFFC-RI volunteer, stated, “I liked the idea of reuniting these families without all the red tape.”

Rachel and her family took in Amy’s baby boy for six weeks while she found a place to live.

“It isn’t just taking care of her son; it’s taking care of Amy too” Rachel stated. Amy and her son remain a part of the Hively family. “I feel like I have someone to talk to now.  I am so thankful.” Amy states with tears of joy in her eyes. 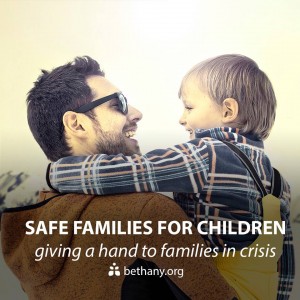 Safe Families for Children was founded in 2003 by Dave Anderson, a phycologist. While working at a foster care Agency in Chicago, a mom asked him for help caring for her children.  David stated, “We only care for kids after they are harmed.”  The mother was persistent and said, “I don’t want anything to happen to my kids, but if you don’t help something bad could happen.”  Dave and his wife took the kids in for a few weeks while the mom got back on her feet and acquired a place to live.  She was incredibly appreciative because her kids did not have to go into foster care.

Dave and his wife began looking for family and friends who would open their homes for children and were willing to come alongside the parents to help them and encourage them as they get back on their feet.  This is how SFFC began.

The intent of SFFC is that all kids go back to their parents.  Currently SFFC is located in over 80 cities throughout the United States, Canada, United Kingdom, and other countries.  SFFC dedicates themselves to stability, family support, and child abuse prevention.  It is not adoption or foster care. In 2014, over 93% of all children in an SFFC hosting arrangement returned home to their family and less than 2% were screened into state custody.

Life does not offer extra time to prepare for a crisis. SFFC can be a life preserver for many families until the family is back together and safe on shore.  SFFC practices biblical hospitality. Will you and your church join in the effort and make a difference in the lives of those is need?

For more information on SFFC, please visit their website at www.safe-families.org. You can contact them at sffcri@bethany.org or call 401-467-1395.