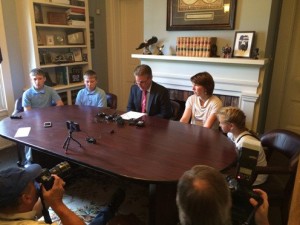 Jeffrey Edward Fowle’s Family and lawyer plead for his release.

(WNS)–The family of an American man detained in North Korea for “anti-state” crimes apologized to the country yesterday and pleaded with officials to show mercy and release him, saying in a statement that they were desperate for him to return home.

Jeffrey Edward Fowle, 56, is from Miamisburg, Ohio. His wife and three children appeared at a newscast, but didn’t speak. Attorney and family friend Tim Tepe acted as their spokesperson, reading their statement and answering questions while they sat nearby. He said the family was not answering questions out of fear of compromising Fowle’s situation.

Tepe said Tatyana, Fowle’s 40-year-old wife and their family is struggling to survive financially. Fowle told her on a recent phone call that he was afraid the benefits from his job at the city streets department would run out soon.

“The kids miss their dad, that’s the bottom line,” Tepe said. “(Tatyana) is having to be mom and dad at this point for the past three months. … I hear the desperation in her voice to get Jeff home.”

Fowle was detained sometime after arriving in North Korea on April 29 for what the country said were hostile actions that violated his tourist status. It is suspected that he left a Bible in a nightclub in Chongjin.

Tepe said Fowle was not on a church mission, but on a vacation tour in the country. 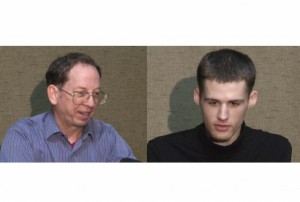 North Korean officials said they are preparing to bring Fowle and another American detainee, Matthew Todd Miller, 24, of Bakersfield, Calif., before a court. They have not specified what actions on the part of the Americans is considered hostile or illegal. The country has also not indicated what kind of punishment they might face.

Tatyana Fowle and her three children have written to President Barack Obama to ask for his intervention. They also reached out to former presidents George W. Bush, Bill Clinton, and Jimmy Carter. Tepe said only Bush responded, though they have received assistance from Sen. Rob Portman, R-Ohio, Rep. Michael Turner, R-Ohio, and former congressman and U.S. diplomat Tony Hall.

The U.S. has no diplomatic ties with North Korea and no embassy there, but has offered to send a human rights envoy to Pyongyang to seek a pardon for the detainees. The U.S. State Department works with the Swedish embassy in North Korea in cases like this. A small number of U.S. citizens visit North Korea as tourists every year, something the State Department has strongly discourages.

The State Department re-emphasized its commitment to Fowle’s release yesterday, but the Obama administration has not had any luck getting the North Koreans to release another American detainee, Kenneth Bae. The Korean-American missionary was sentenced to 15 years hard labor in late 2012 for plotting to overthrow the government.

But in February, the North Korean regime released Australian missionary John Short, who was arrested earlier this year for evangelizing. Short apologized to the government and begged for his freedom on a video released to the international media.