(NaturalNews) Just as we predicted, the U.S. Food and Drug Administration (FDA) has brazenly betrayed the public’s trust by approving the world’s first genetically modified (GM) animal in direct defiance of science – a transgenic salmon branded “AquAdvantage” that has never been proven safe for human consumption or the natural environment.

The New York Times (NYT) reports that AquAdvantage, a product of AquaBounty Technologies, has received official FDA approval after years of fierce lobbying by its manufacturer in favor of open approval. Despite repeated warnings from detractors that AquAdvantage poses serious threats to aquatic ecosystems and humans, the FDA has determined that this GM fish is completely safe for everything and everyone on the planet. 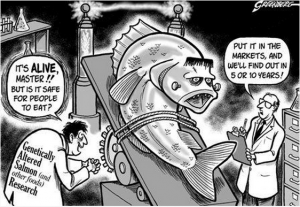 Many of the claims made about AquAdvantage by its manufacturer have been debunked, including the lie that this “Frankenfish” grows more quickly than natural salmon and is less prone to disease – both of which claims are patently false. AquAdvantage was also said to pose no threats to aquatic environments because it is supposedly sterile, but this, too, has been called into question by independent scientific review.

The FDA has repeatedly ignored all petitions from consumer watchdog groups to take a closer and more unbiased look at GM salmon to determine its true safety, including whether or not it is even needed. Consumers have overwhelmingly indicated that they don’t want to eat this or any other GM animal, yet the FDA now plans to allow its entrance into the food supply – unlabeled, of course.

“This unfortunate, historic decision disregards the vast majority of consumers, many independent scientists, numerous members of Congress and salmon growers around the world, who have voiced strong opposition,” voiced Wenonah Hauter, executive director of the consumer advocacy group Food and Water Watch (FWW), in a recent statement.

Approval for AquAdvantage has been a long time coming, as AquaBounty petitioned for the FDA’s blessing on its phony fish as far back as the 1990s. Five years ago, the FDA granted a type of preliminary approval for AquAdvantage, but the fish never entered the market due to what many believe was the federal government’s fear of public backlash.

But the FDA’s decision to grant quiet approval for this GM salmon amidst media distraction aimed at global terrorism and war in the Middle East isn’t necessarily going as smoothly as planned. The Center for Food Safety (CFS), which has long opposed approval for AquAdvantage on the basis of science, warned within hours of the FDA’s approval that it plans to file a lawsuit against the agency.

“The fallout from this decision will have enormous impact on the environment,” lamented Andrew Kimbrell, executive director of CFS, in a recent press release. “Center for Food Safety has no choice but to file suit to stop the introduction of this dangerous contaminant. FDA has neglected its responsibility to protect the public.”

Not only have millions of Americans voiced their opposition to GM salmon over the past several years – with no acknowledgment from the FDA – but so have at least 40 members of Congress and more than 300 environmental groups that work on behalf of consumers, animals, fisheries, food companies and restaurants.

“The review process by FDA was inadequate, failed to fully examine the likely impacts of the salmon’s introduction, and lacked a comprehensive analysis,” Kimbrell added. “This decision sets a dangerous precedent, lowering the standards of safety in this country. CFS will hold FDA to their obligations to the American people.”