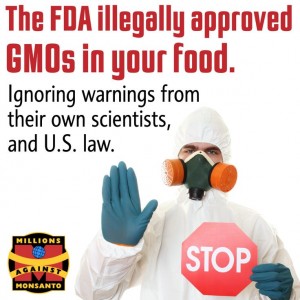 The recent avoidance of a government shutdown allocated $3 million to what amounts to a planned propaganda campaign for GMOs. However, it’s being called a “consumer outreach” program focused on “educating consumers regarding agricultural biotechnology.” The campaign will discuss nutritional, environmental, food safety, humanitarian and economic impacts of biotech crops, genetically modified organisms and GMO foods.

Why is the FDA helping to promote an industry it regulates?

Over 50 food industry and agriculture groups petitioned for the funding for this campaign, which they think will “offset misinformation” about genetically modified organisms and GMO foods. However, House Democrats and environmental groups have derided this decision as government-funded PR for the GMO industry.

Many are puzzled that the FDA would get involved in promoting the safety and use of genetically modified organisms and GMO foods. Rep. Nita M. Lowey pointed out that the FDA should not be in the business of promoting any industry that they regulate and oversee.

House Democrats tried to redirect the $3 million funding to FDA pediatric medical projects, but these efforts were voted down unanimously by House Republicans. The initiative will be developed with the Department of Agriculture and include distribution and publication of “educational information.”

“Big agriculture” lobbies and pays politicians to promote their interests

While 90 percent of American Association for the Advancement of Science members believe genetically modified organisms and GMO foods are safe to eat, the long-term effects of these frankenfoods is still not known. What might happen several generations from now? No one is sure because we are the first generation to consume them.

Farm data from the past 14 years also shows GMO planting seems to go hand in hand with increased herbicide use, which can bring about a range of health issues. It also remains to be seen what tinkering with the DNA of crops will do to the entire ecosystem down the road.

Agribusiness interests donated over $26 million to political campaigns, including those who sit on the House agriculture appropriations subcommittee. Rep. Robert B. Aderholt (R-Ala.), the subcommittee chair and supporter of GMO propaganda campaign funding, received $10,000 from the Monsanto company in 2016.

Clearly “Big Ag” is doing all it can to influence governmental policy. This is in the face of a lack of evidence that GMOs are bringing the benefits that the industry claimed they would. A New York Times analysis found that crop yields have not been significantly increased. GMO crops also offer no taste or nutritional benefits to consumers, and in some cases, taste and nutritional value are reduced.

Informed consumers won’t as easily be swayed by propaganda, so continue to educate yourself about the facts. Organic, locally-sourced fruits and vegetables are always the healthiest choice.