Feature Film Vanished to Premiere in U.S. on Sept. 28 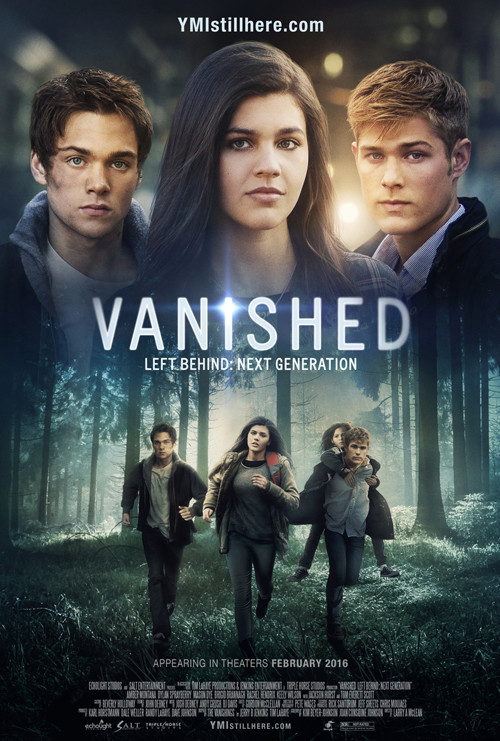 Inspired by the New York Times best-selling book series by authors Tim LaHaye and Jerry B. Jenkins, the event will be presented as a special one-night exclusive engagement by EchoLight Studios in partnership with Fathom Events.

In addition to the feature, audiences will get to experience a Q&A with cast/filmmakers hosted by national speakers and youth leaders Doug Fields and his Co-Founder of Download Youth Ministry, Josh Griffin.

“‘Vanished | Left Behind: Next Generation’ is a fresh, new YA genre feature that is already being embraced by young and old alike,” said Jeff Sheets, president of EchoLight Studios, speaking in a news release. “The journey that unfolds will captivate, entertain and challenge audiences.”

According to the news release, the movie is reminiscent of “Twilight,” “The Walking Dead” and “The Hunger Games.” It takes its characters – and the audience – far beyond their own fears and desires, opening them to the questions of purpose, and whether their lives and choices really matter.

When a billion people around the globe suddenly vanish and chaos engulfs the nation — headstrong 15-year-old Gabby (Amber Frank) is thrust into adulthood way too soon.

The event forces Gabby, along with her younger sister Claire (Keely Wilson) and the two teen boys vying for Gabby’s affection, Josh (Mason Dye) and Flynn (Dylan Sprayberry) – to try to figure out what has happened and how they fit into this dangerous new world.

Film promoters say that girls will relate to Gabby and her struggles to deal with missing parents and big sister responsibilities – while wishing they were in her shoes when she’s forced to choose between the all-American hero Josh and the dark and mysterious Flynn. Guys will be pulled in by the “suspense and cool new twist” on the “end of the world” adventure.

“We are excited to debut this exclusive experience on the big screen,” said Kymberli Frueh, Fathom Events vice president of programming, speaking in a news release.

He added, “The best-selling ‘Left Behind’ books from the ’90s and early 2000s made a huge impact on their readers and ‘VANISHED | Left Behind: Next Generation’ will resonate with those enthusiasts while engaging a new legion of young fans.”

Tickets for the movie can be purchased online by visiting www.FathomEvents.com or at participating theater box offices. For more information, please visit: thevanishedfilm.com.