When you come to a fork in the road, take it. You can observe a lot by just watching. It ain’t over till it’s over It’s like deja vu all over again. No one goes there nowadays, its too crowded. Baseball is ninety percent mental and the other half is physical. A nickel ain’t worth a dime anymore. Always go to other people’s funerals, otherwise they won’t come to yours. We made too many wrong mistakes. Congratulations. I knew the record would stand until it was broken. You wouldn’t have won if wed beaten you. I never said most of the things I said. The future ain’t what it used to be.

If it wasn’t for electricity we’d have to watch TV by candlelight. 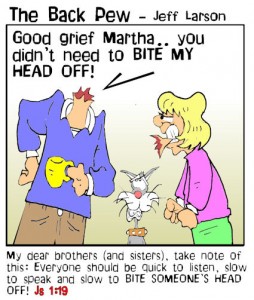 The Energizer Bunny and Peter Cottontail got into an argument. The squabble quickly escalated until some friends needed to call the police. The two were arrested and taken to jail. ENDING #1: One was later charged with Battery. ENDING #2: At their court hearing, the presiding judge, upon reviewing the day’s agenda, said under his breath, “Well, it looks like we are going to have a bad hare day.”

Based on my calculations, I can retire 5 years after I die.

Father: “Son, you need to be more industrious. After all, when Abraham Lincoln was your age he was out splitting rails.” Son: “I know, Dad. And when he was your age, he was President.”

A man driving in southern Indiana, heading for Kentucky, saw a sign that read: “LAST CHANCE FOR $1.55 GAS!!!” He still had more than a quarter of a tank left, but figured he’d better take advantage of this opportunity to fill-up his tank cheap. As he was getting his change from the attendant, he asked, “So, how much IS gas in Kentucky?” The man replied, “A buck and a quarter.”

THINGS YOU WOULD NEVER KNOW WITHOUT THE MOVIE INDUSTRY:

~ Large, loft-style apartments in New York City are well within the price range of most people–whether they’re employed or not. ~ Most laptop computers are powerful enough to override the communications system of any invading alien society. ~ It does not matter if you are heavily outnumbered in a fight involving martial arts–your enemies will wait patiently to attack you one by one by dancing around in a threatening manner until you have knocked out their predecessors. ~ Rather than wasting bullets, megalomaniacs prefer to kill their archenemies using complicated machinery involving fuses, pulley systems, deadly gasses, lasers, and man-eating sharks, which will allow their captives at least 20 minutes to escape. ~ During all police investigations, it will be necessary to visit a strip club at least once. ~ Most dogs are immortal. ~ All grocery shopping bags contain at least one stick of French bread. ~ It’s easy for anyone to land a plane providing there is someone in the control tower to talk you down. ~ The ventilation system of any building is the perfect hiding place. No one will ever think of looking for you in there and you can travel to any other part of the building you want without difficulty.

An elderly woman died last month. Having never married, she requested no male pallbearers. In her handwritten instructions for her memorial service, she wrote, “They wouldn’t take me out while I was alive, I don’t want them to take me out when I’m dead.

My therapist said that my narcissism causes me to misread social situations. I’m pretty sure she was just hitting on me. ~ Insanity runs in some families; in others it positively gallops. ~ I don’t think my postman likes me. I sent away a film to be developed and on the envelope it was printed – PHOTOGRAPHS DO NOT BEND. He folded the envelope in half and wrote on the outside, “Oh yes they do.” 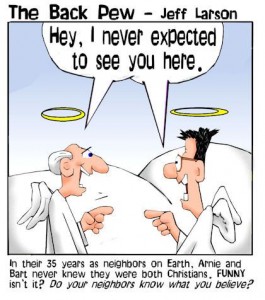 One night I was tucking my 4-year-old son in to bed and I told him his nightly Bible story. This night it was the story of the prodigal son. We discussed how he had taken his inheritance early, left and spent it all on living it up and partying until he had no money left and had to work on a pig farm where he couldn’t even afford to eat what the pigs ate! He remembered his father and went back home to ask for a job and forgiveness. His father welcomed him home with much joy! After we finished the story I asked my son what he learned and he immediately said, “Never leave home without your credit card!”

Won’t You Be My Neighbor?