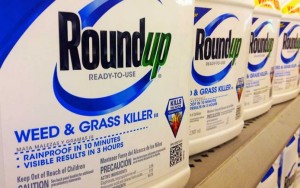 Health Impact News reported on the alleged fraud of sealed documents that the U.S. EPA had in their possession that showed glyphosate, the main ingredient in Monsanto’s Roundup herbicide, was harmful and linked to cancer back in 2015.

According to Dr. Anthony Samsel, the author of several published studies showing the toxicity of glyphosate, these documents were sealed as “trade secrets.” He was able to obtain copies of the documents and discussed his findings in an interview back in 2015.

Samsel states that these problems with glyphosate causing cancer and other health problems were known to the EPA back in the 1970s. See: healthimpactnews.com/2015/glyphosate-causes-cancer-epa-trade-secret-sealed-files-reveal-cancer-link-known-back-in-the-1970s

Unfortunately, this news was completely ignored by the mainstream media.

Earlier in March 2017 however, Judge Vince Chhabria in San Francisco federal court, who is presiding over litigation brought by people who claim to have developed non-Hodgkin’s lymphoma as a result of exposure to glyphosate, ordered many sealed files on glyphosate to be unsealed in pending litigation against Monsanto.

This was big news, and the mainstream media was forced to cover it. The N.Y. Times, for example, reported:

The reputation of Roundup, whose active ingredient is the world’s most widely used weed killer, took a hit on Tuesday when a federal court unsealed documents raising questions about its safety and the research practices of its manufacturer, the chemical giant Monsanto.

Roundup and similar products are used around the world on everything from row crops to home gardens. It is Monsanto’s flagship product, and industry-funded research has long found it to be relatively safe. A case in federal court in San Francisco has challenged that conclusion, building on the findings of an international panel that claimed Roundup’s main ingredient might cause cancer.

The court documents included Monsanto’s internal emails and email traffic between the company and federal regulators. The records suggested that Monsanto had ghostwritten research that was later attributed to academics and indicated that a senior official at the Environmental Protection Agency had worked to quash a review of Roundup’s main ingredient, glyphosate, that was to have been conducted by the United States Department of Health and Human Services.

That’s a rare admission from a corporate-sponsored media source, and one has to wonder what the future holds for Monsanto and the world’s most widely used herbicide containing glyphosate.