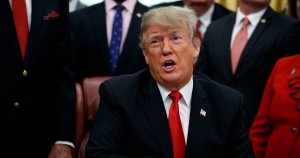 Does the United States have the money for a border wall? Opponents of President Donald Trump — both Democrat and Republican — insist not, but the numbers tell a different story.

On Friday, CNS News Editor-in-Chief Terence P. Jeffrey pointed out a staggering statistic: Despite constant foot-dragging in Congress, the sum requested by Trump for the southern border security wall is just a drop in the bucket compared to how much the nation spends on food stamps.

“The federal government spent more money on the food stamp program in October, which was the first month of fiscal 2019, than President Donald Trump now wants the Congress to approve for the border wall for the entirety of fiscal 2019,” he wrote.

Sure enough, information from the Department of the Treasury confirmed that the federal government spent $5,892,000,000 on food stamps through the Supplemental Nutrition Assistance Program. And that was just for one month.

But the amount Trump requested to fund the border wall? About $5.7 billion for the entire year, or the equivalent of one month of SNAP payments.

Beginning in fiscal year 2010, the SNAP program has cost at least $65 billion annually, or an average of $5.4 billion or more monthly, according to federal government data. These facts fly in the face of lawmakers who have repeatedly insisted that America can’t afford the wall project to safeguard the border.

Senate Minority Leader Chuck Schumer called $5 billion for the wall “exorbitant” on Wednesday. “(T)he president held out for $5 billion for his wall, at the exorbitant cost of $31 million per mile, straight from the American taxpayer’s pocket,” he declared.

Schumer did not specify how much money was acceptable when it came to securing the nation he swore an oath to protect. Money certainly doesn’t seem to be an issue for other liberals, including newly elected Congresswoman Alexandria Ocasio-Cortez of New York.

When asked by reporters including CNN’s Jake Tapper to explain how America would fund her shockingly expensive college-for-all and Medicare-for-all demands, she brushed the question aside and implied that we could afford it if we wanted to.

It’s also worth pointing out that in many cases, widespread illegal immigration leads to more people on welfare, thus creating a vicious cycle. Not long ago, California became the state with the highest poverty rate in America. There’s no disputing that “sanctuary city” policies and unrestricted immigration played a major role in this situation.

As yet another excuse used by political elitists falls apart, it’s worth asking what their actual goals are. Why are so many politicians, particularly Democrats, almost fanatical in their opposition to effective border security methods like a wall, and so focused on ramping immigration — both legal and illegal — to record levels?

The answer, most likely, is future votes. If so, that would mean that politicians are now putting their careers above law enforcement and border security, while lying about what we can afford. That should make every American take pause.