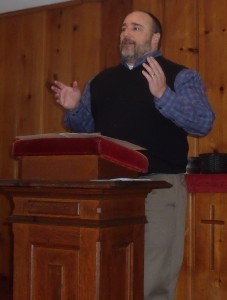 Accepting Jesus Christ as your Lord and Savior along with the transformational gifts only He can provide has its own challenges. These are mostly spun out of our own silly and futile resistance to that which has been paid for in blood and given freely by He who loves us unconditionally. 2 Corinthians 5:17 17 “Therefore if any man be in Christ, he is a new creature: old things are passed away; behold, all things are become new.”

That said, imagine then being slowly prodded and pulled along in a direction you could never have anticipated as a direct result of your being saved by His grace, to take what you have learned and bring it to others so they might hear and receive that same “Good News”. Dear Lord, am I qualified? Is this what you want of me? Where do I begin?

It’s hard to believe, but I’m finally comfortable being somewhat retrospective about my Christian writing. As a consequence of my Catholic background therefore, it’s taken me some time to put it into its proper perspective and understand things like, the scope of a churches footprint doesn’t necessarily dictate its contributions, but rather it’s the “mission statement” if you will, which ultimately reflects/projects any degree of success. I’ve had the good fortune of interviewing a number of pastor’s over the years and the one common denominator which seems to join them, is that it all began with a tug at the heart by a force “Who” would not be denied, as well as some faithful partners and a few bucks in hand. Spiritual and divine guidance are clearly a part of the mix as well, but are usually spread out over time, and at the “soul” discretion of the Lord who already knows the outcome. As a word of advice, and from personal experience, I would tell you not to waste your time trying to second guess Him.

New Year’s Eve 2005 found Robert Levesque seemingly at the bottom. A “confluence of self-inflicted low points” had placed him face to face with the Christ who would save him. When I spoke with the 56 year old and now “Pastor Bob” after services at the “New Beginnings Christian Fellowship Church” in Exeter Rhode Island this past Sunday, he likened the experience to his petite Grandmother reaching up and grabbing his ear when he was a teenager, leading him along and saying: “That’s about enough of this”. Nevertheless, saying the words “I’ve accepted Jesus Christ as my Lord and Savior” that evening to a high school friend turned pastor, and during a frantic and somewhat panicked phone call, was still a stunning and humbling revelation for this burly football & track coach teacher who loved riding his motorcycle with all the wrong folks. Ironically, (or maybe something else), it was that night he was on his computer and had somehow tabbed his way to the website for the Cristian Motorcyclists Association (CMA), an organization he’d later ride with. Admittedly, he told me he simply could no longer reconcile the life he was leading to himself, or for that matter, to his son and daughter. And so began a journey that like so many others, (including mine), first required accepting the fact that “we are not in control” so much as we’d like to think we are.

Driving down the gravel Road to the small but welcoming “Tefft Chapel” on the grounds of Canonicus Campground at the American Baptist Churches of Rhode Island compound, I had already conceded that I would be once again moved and further transformed by the conversation I was about to initiate. Pastor Bob Levesque was about to conclude services, but I was lucky enough to catch a few songs performed by Crimson Rain’s own Danny Vieira. Crimson Rain is a Christian rock band with a unique blend of original, classic and modern rock. Pastor Bob introduced me to Danny after the service and we sat and spoke for a few minutes. He explained how he’d been very involved with his churches worship group along with his dad growing up, but had spent some time on his own trying to place his obvious talent in the proper perspective for the Lord. He eventually found himself in a Christian leadership school in East Providence Rhode Island, working on bringing the two together. During that time the school had been forced to move, and the leadership realized it was time to set their leaders about their missions. Danny had met Pastor Bob along the way at a “bike blessing” via the CMA and answered when he called looking for someone to lead worship at his new church. Pastor Bob explained that he could not think of anyone more talented and suited for the job, and that he was both relieved and happy that Danny had accepted his invitation. After listening to Danny sing and play his guitar, I concur completely. 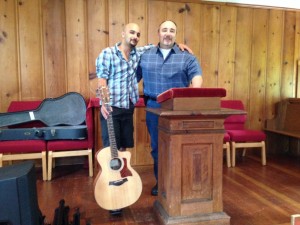 Pastor Bob and I then talked at length about the twists and turns which brought him to this beautiful place on a wooded country road to be an “Under-Shepard” to Christ. I was struck by his quick and effortless grasp of scripture, and how he seemed to meet all of my questions with Biblical and completely appropriate answers. He told me of how he’d come to be a studied and active member of a church during his faith journey, and that at one point he was even thought of as a possible Pastoral replacement for a retiring church leader in a large church. All the while however, he admitted that there was a “still small voice” deep inside his soul, leading him in another direction. We talked about family and how his wife and church deacon Cheryl reminded him that he could not shut out that voice, but rather he should embrace God’s plan for him no matter where it lead. They prayed about it regularly and sought the kind of “advice” that only prayer can provide. Pastor Bob could feel his life changing yet again, and would eventually retire from teaching in 2012.He was becoming that “new creation” and he could feel it. The exact direction and what it all meant, had yet to be revealed to him though.

Believing and teaching are two different things, and Bob Levesque’s life’s experience had taught him this. But he also knew that God was working in him and that if it was His will that Bob minister and “sow the seeds”, than that is what would be. But how? You see, the mechanism and means are always those things we as human beings must have an answer to; but God as our creator is so very good at keeping from us until He sees fit to reveal His greatness. The answer would eventually come however, at a church picnic in the Fall of 2013, Pastor Bob and his wife found themselves enjoying a beautiful day at Camp Canonicus. They marveled at the location and lovely little chap—– Chapel on the grounds? Bob hadn’t even finished the word chapel and knew right away where the “New Beginnings Church” would be located. He and Cheryl were excited but understandably cautious. Before the day was done though, they would speak with Camp Director Linda Martin who explained that little Tefft Chapel was indeed for rent on a regular basis. Moreover, Bob and Cheryl were overjoyed to learn that the rent would be manageable, at least on a very tight budget they envisioned in the short term. How does one explain all of these avenues opened before our eyes? How do we reconcile His interjection at the most opportune and necessary times? In my humble opinion, we simply must have faith and except the unimaginable power of this awesome God of ours.

Pastor Bob continued on about his journey to the pulpit and I confided in him that I’ve been overwhelmed at times by the spirit that moves me to write as I do. I found myself seeking his obvious Biblical knowledge as I explained that I’m often left amazed but confused after writing an article, but that I also want to get it right for the Lord, no exceptions. With a teachers ease, he explained that my journey might only be the beginning of something that I could not yet know, and that God’s plan for my efforts was but for him to know and me to carry out in its due time. There was something spot on about this Under-Shepard as he calls himself. I was quickly confident in his ready knowledge of the Word, as he quoted and quoted in response to my queries. “1Peter 3:15 But in your hearts revere Christ as Lord. Always be prepared to give an answer to everyone who asks you to give the reason for the hope that you have…”

It’s been almost a year this October that Pastor Bob and his small but rooted and growing church put down roots in Exeter. We closed out our interview while he expanded upon Mathew 13 and how numbers are not necessarily the whole game. It sounded almost out of place when this avid sports fan and football coach recounted something he’d heard many years earlier. “God calls us to feed his sheep, not to count them”. It was at that moment that I knew, while the efforts of all churches who minister and sow are worthy of our attention and faith efforts, it is the grass roots and “New Beginnings” which are at the very core of Christianity. These ordinary people who hear because they are listening, and see because their eyes are open, they are the ones driven only by the good they know they must do and by the faith which allows them to walk headlong into uncertainty.

This was a small church and a small group to be sure. But their voices were loud, their music was great, and their pastor’s message one of persistence and passion for Christ. All in all, those are some good seeds…

There will be a music festival concert event featuring New Beginnings worship leader Danny Vieira with Crimson Rain on Saturday August 2nd on the grounds at Camp Canonicus just behind Tefft Chapel at 54 Exeter Road in Exeter Rhode Island, from 10Am until 6PM. The music and refreshments are free, so come and enjoy an afternoon of fellowship in this picturesque place before the Lord. The event is sponsored by the CMA and New Beginnings, but any and all donations are greatly appreciated.

You can find out more about New Beginnings Christian Fellowship Church by calling 401-439-4557 or email Pastor Bob at newbeginningscfc@verizon.net. Catch up with Crimson Rain as well at www.crimsonrainmusic.com.

One thought on “Feed The Sheep…”