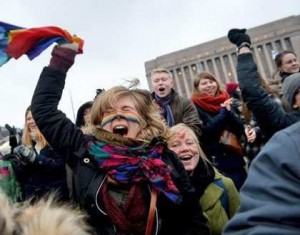 Homosexual activists were screaming and cheering outside of the Parliament building after the vote. But it’s a bit premature.

(WNS)–Support for same-sex marriage voiced by one of Finland’s top religious leaders prompted about 12,000 Fins to resign their membership in the Finnish Lutheran Church.  Finland’s parliament narrowly approved a measure legalizing same-sex marriage by a vote of 105 to 92 in early December. Following the vote, Kari Mäkinen, the Lutheran Archbishop of Finland, praised the outcome in a statement on Facebook.  “I know how much this day means for rainbow people, their loved ones and many others. I rejoice with my whole heart for them and with them,” wrote Mäkinen, according to Europe’s Pink News.  Mäkinen noted Finland’s position as the last Nordic country to legalize same-sex marriage: “We are in the same situation as our neighboring Nordic Churches: our concept of marriage needs a fundamental examination. Speaking for myself, I think it is time for reconsideration.” In the days following the statement, nearly 12,000 people resigned their membership in the Lutheran Church in Finland, according to Finland’s YLE news. A website making it easy for people to resign online continues to track daily totals. Comments on the website seem to suggest the majority of resignations are in response to Mäkinen’s statements.