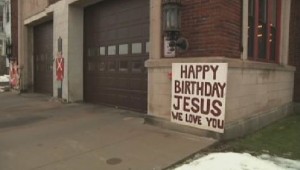 (Utica, NY)—Outside Firehouse No. 4 is a sign that reads, “Happy Birthday Jesus We Love You.” It’s a sign the crew at the firehouse has displayed every year since the terror attacks of 9/11. Now, the atheist group Freedom From Religion Foundation (FFRF) is demanding it be taken down. The sign, they say, is “exclusionary and alienating.”

No way, says Utica Fire Chief Russell Brooks, who, according to the Christian Post, has been bombarded with letters demanding the removal of the sign.

“9/11 brought a lot of the guys closer to God,” explained Brooks, “and they just wanted to show their faith in Jesus. They had no idea a controversy would arise.”

“I was advised by the Thomas [More] Law Center that we were well within our rights to display our Christmas sign,” added Brooks. “In addition, they would support us, as well as any efforts from any organizations looking to prevent us from doing so.”