LOS ANGELES – Nations are drowning in unparalleled levels of debt, fears of economic calamity are growing and global leaders such as Pope Francis are warning the world has entered the “last times” and is at the beginning of a “piecemeal” Third World War.

To address these crises, world leaders recently met at the United Nations to consider a 15-year plan titled, “Transforming Our World: The 2030 Agenda for Sustainable Development”- a proposal some experts believe could be the first step toward the global state and cashless society predicted by the biblical prophets. 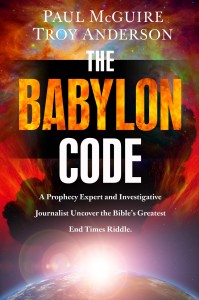 “The real agenda of the globalist elite through all these ‘sustainable development’ and ‘social justice’ programs are to create a new global state,” says Paul McGuire, a Fox News and History Channel commentator and co-author of ‘The Babylon Code: Solving The Bible’s Greatest End-Times Mystery’.

“We read in the book of Revelation that in the last days Babylon will return as a ‘born again’ world government, religion and economic system. What is happening now with the United Nations is Babylon rising again before our very eyes.”

‘THE BABYLON CODE’ foretells an international takeover by the world’s elite-a global political and financial coup that will set the stage for the last days-and reveals how secret forces are at work to create a global government, economic system, and religion.

‘THE BABYLON CODE’ is based on decades of research, more than 100 interviews (Billy Graham, Noam Chomsky, Dr. Tim LaHaye, Hal Lindsey, Rabbi Jonathan Cahn, Joel Rosenberg, among others) as well as the review of books, news articles, and government documents. The authors’ award-winning journalism and credible end-times expertise has captured the attention of notable faith leaders and secular experts who are endorsing ‘THE BABYLON CODE’ as the first thorough investigation into the end times.

Join Anderson (www.troyanderson.us) and McGuire (www.paulmcguire.us) as they uncover not only what may be the biggest story and political scandal in modern history, but also the key to both our survival and our salvation.