North Dakota has become the first state to approve government use of drones equipped with “less than lethal weapons”, including “rubber bullets, pepper spray, tear gas, sound cannons, and Tasers”.

The bill passed largely due to the inherent corruption of the US political system, as the wording was modified to allow for weaponized drones and approved “thanks to a last-minute push by a … lobbyist representing law enforcement—tight with a booming drone industry”.

The Republican who originally proposed the bill had written it to ban all weaponization of drones, and he was dismayed that it ultimately passed in a form that allows non-lethal weaponization. 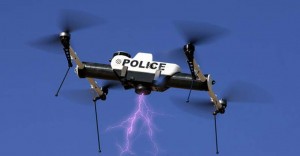 Police claim the drones will only be used in “non-criminal” situations, such as surveillance, but did not mention that they have already been used in at least one criminal situation, or that the claim is dubious at best given the ultra-militarized and brutal state of policing in the US, which many, particularly those in ethnic minority groups, liken to military occupation.

A police deputy, explaining why he opposed requiring search warrants for use of drones, told Daily Beast that “you don’t want things that would potentially have a chilling effect on [drone] manufacturers”.

“It’s really all about the commercial development,” said Republican rep. Gary Paur. As Daily Beast puts it, “In other words, limit civil liberties so Big Drone can spread its wings.”

Of course, there is a bit more to it than that, as numerous US crackdowns on pro-democracy protesters, including mass arrests of civilians and journalists, demonstrate.