Flint, Michigan, bureaucrats could be charged with manslaughter for mass poisoning of population with toxic lead

(NaturalNews) The Michigan Attorney General’s office will likely have to petition the state legislature for some hefty cash to investigate the ongoing water crisis in Flint, Michigan, where some nine local residents have died from polluted water. According to reports, those responsible for the disaster could face criminal charges for negligently poisoning the city’s residents with lead and other toxic substances in order to save money. 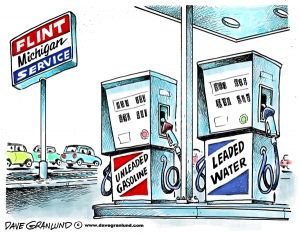 A special counsel has been established to determine who is at fault and to press charges against them, as this once local crisis captivates the nation. Sources say charges all the way up to manslaughter are “not far-fetched,” and that the proper course of action will be taken to make sure the culprits are held fully responsible for their crimes.

“We’re here to investigate what possible crimes there are, anything to the involuntary manslaughter or death that may have happened to some young person or old person because of this poisoning, to misconduct in office,” stated Todd Flood, special counsel for the state Attorney General’s office investigating the Flint water crisis.

“We take this very seriously.”

Flood, who plans to take $400 an hour as pay for his role as special prosecutor in the case, has gained a seal of support from Attorney General Bill Schuette, who insists that such a salary is appropriate to assemble a “top-shelf” team to conduct the probe.

Fluoride makes lead more toxic – will anyone in Flint investigate this?

More like where the money goes, Flood is sure to go, insist critics, who have been quick to point out that Flood has previously and on numerous occasions made political contributions to both Schuette and Republican Governer Rick Snyder. Snyder, of course, is one of the individuals supposedly being investigated for poisoning families and young, developing children in Flint.

Melanie McElroy, executive director of Common Cause Michigan, issued a statement recently questioning just how “independent” the Flood-led investigation will actually be, considering the serious conflict of interest at hand. There’s also the issue of Schuette padding his own office, as well as that of Gov. Snyder and various state departments, from prosecution and lawsuits during the investigation.

“Bill Schuette’s ‘independent investigation’ seems more focused on rewarding campaign contributors with state contracts than getting to the bottom of why Flint’s water was poisoned with lead,” she wrote.

One of the departments being investigated, the Department of Environmental Quality Control, is reportedly on the chopping block for failing to address the problem of lead being leached from old, corroding water pipes. Sources say DEQ Director Dan Wyant resigned back in December for failing to properly mitigate the problem, which put Flint’s nearly 100,000 residents at risk of permanent brain damage.

It just so happens that synthetic fluoride chemicals, which have been added to Flint’s water supply for many years, are known to increase lead absorption in humans. Fluoride is a caustic substance that reacts with lead to make it more toxic, creating a major public health hazard, hence the importance of removing fluoride from drinking water.

Flint residents last April actually petitioned the local water department to remove fluoride from the water supply, for this and other reasons. This suggests that those responsible for continuing Flint’s fluoride program may also be indicted as part of the investigation for putting residents at risk – that is, if the investigating team bothers to take a look at the science surrounding fluoride and its synergistic toxicity with lead.